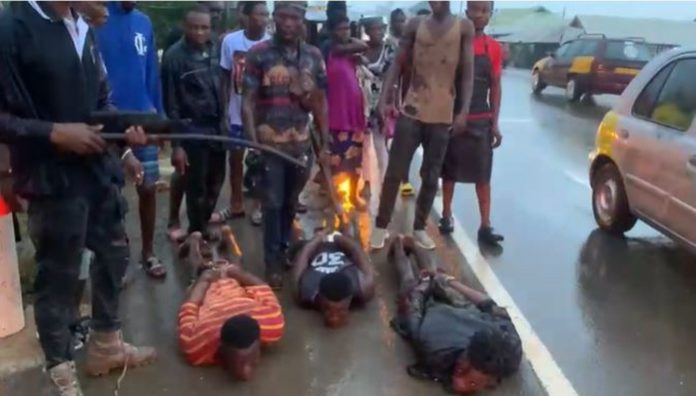 Eight armed robbers who attacked and shot five people including the Chief at Adanse Praso in the Assin North District have been arrested by the Youth in the Community.

The suspects were arrested on the night of Friday, June 17 on someone’s Cocoa farm.

They have been handed over to the New Edubeasi Police for an investigation.

It will be recalled that armed robbers numbering about 30 attacked the Chief and residents of Adanse Praso.

They ransacked the Palace forcing the chiefs and residents to run into a bush leading to the shooting of five residents who are currently receiving treatment at the Assin Praso Presbyterian Hospital.

Some Youth from Adanse Praso who have travelled outside the town upon hearing of the incident returned home in their numbers and supported the watchdog committee members to arrest eight armed robbers while pursuing the others.

Residents are, however, appealing to the Inspector-General of Police to beef up security in the area as they are leaving in fear and panic and can go about their daily activities in peace.

According to them, their foodstuffs are rotting since people from the nearby Communities who usually buy from them are now unable to do so due to issues of security.

The Adontenhen of the Community, Nana Otuo Acheampong, also appealed to the Inspector-General of Police to assist the community with a police post that will enhance security in the area.