Mike Tyson got the sporting world salivating over a potential comeback after videos of his training sessions went viral earlier this month.

The 53-year-old, looking the fittest he has in years, showed that he still possesses much of the speed and explosive power that made him the youngest heavyweight champion in boxing history.

Anthony Joshua, who currently holds the WBA, IBF, WBO, and IBO heavyweight titles, says ‘Iron Mike’ was his idol growing up and would relish his return to the sport.

“If he’s back in the ring then I would love to see it, I would definitely be one of the viewers that’s for sure,” Joshua told British GQ. “That’s the man who got me [into boxing].

“Do you know what it was with Mike, when I watched him on YouTube, I see a little kid that was 13 and I truly believe — no matter what anyone has to say about Mike Tyson now in terms of what he went through when he was fighting, some of the controversy he went through — the guy took himself from his neighborhood, which wasn’t the prettiest of scenes, up to an amateur champion, to the youngest ever world champion, to one of the most recognized faces of the sport.”

After becoming the youngest heavyweight champion ever at just 20 years old in 1986, Tyson was sent to prison for three years following a 1992 rape conviction.

‘Working out for health and wellness’

Recent reports have suggested Tyson could return to the ring in a series of exhibition fights in Australia, while Evander Holyfield — who infamously had a chunk of his ear bitten off in a fight with Tyson — admitted he would be open to a rematch.

Max Markson, who works with Australia’s leading boxing promoter Brian Amatruda, told CNN they hope to bring Tyson to Australia in 2020 or 2021 to fight high-profile names such as All Blacks star Sonny Bill Williams.

However, Rob Hickman, CEO of Tyson’s licensing & branding company Tyson Ranch, said the former world heavyweight champion is instead looking to fight in the US.

“Mike wants to do exhibition matches in the States for the homeless and addicted in America,” he told CNN. “Mike is working out for his own health and wellness.

“It is 15 years since Tyson last fought professionally, a sad defeat to Kevin McBride, but Joshua insists the American will only view his time away from the sport as an extended absence.

“This is what we breathe, this is what we are, and especially someone like Iron Mike Tyson, that’s all that man knows,” Joshua said.

“So for everyone else it’s a comeback but for him it’s just what he does, he’s a fighter.

“So he’s probably just taken a little break but for everyone else it’s: ‘Oh my God, Mike Tyson is making a comeback’ but for Mike Tyson it’s like: ‘This is what I do, I’m a fighter by nature.’

“In my opinion, the only two faces that are recognized in boxing globally are Muhammad Ali and Mike Tyson. They’re the main faces of this sport. So from where he started to where he is now, he is my ultimate motivation.

“The reason I say is that because he’s the closest guy that was to my generation so he holds a special place in my heart.” 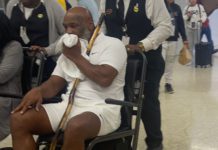 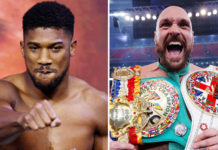 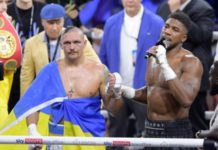 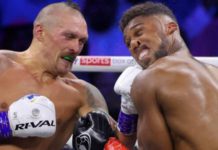 I let myself down – Anthony Joshua on post fight antics