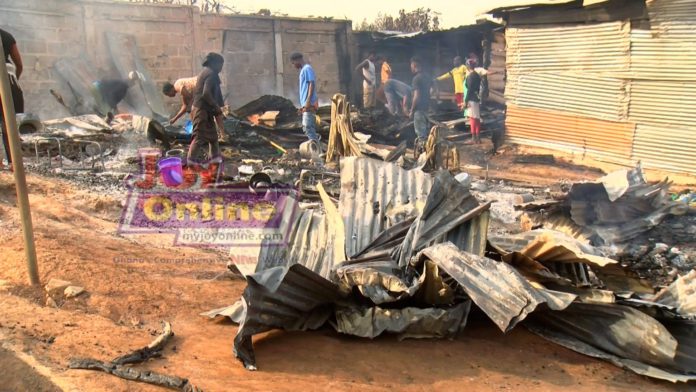 Firefighters battled an intense blaze that emanated from a fuel tanker at the Kaase Industrial Area in Kumasi on Friday.

The affected area is alleged to be a hideout for individuals engaged in illegal fuel siphoning activities.

Eyewitnesses say some individuals were using gallons to siphon fuel from the tanker at a hideout when it went into flames.

The fire spread to an abandoned factory in the area. About 50 make-shift structures occupied by squatters were burnt completely.

Four fire tenders arrived at the scene to bring the situation under control.

While the individuals were engaged in the illegal operation, a tricycle whose engine was running nearby, emitted sparks that caused the explosion.

Ashanti Regional Fire Commander, Rashid Nisawu, said the persons engaged in the siphoning of fuel failed in their attempts to douse the fire, which later spread to other parts of the area.

No casualty has been recorded but a number of families have been displaced.