The Eastern Region Minister-designate, Eric Kwakye Darfour, has confirmed that two persons have been arrested in connection with the ambulance attack that resulted in the death of the driver.

In an interview with Adom News, Mr Darfour admitted that although the police had delayed in making significant arrests in connection with the case, it was due to lack of critical information from prime witnesses.

According to him, the pregnant woman and the other female paramedic, who were victims and witnesses of the attack, were traumatised after the incident and refused to talk about it.

“After this horrific event, the victims were traumatised so it took the police more than three to four days to get a witness statement from them.

“And with the information that the police got from the victim, they were able to establish some leads which have resulted in the arrest of these two persons,” he told Adom News’ Edwin Siaw.

Highway robbers in the wee hours of Thursday attacked an ambulance vehicle that was conveying a pregnant woman in labour from Akuse Government Hospital to the Koforidua Regional Hospital.

The driver, who was shot in the eye, subsequently died on Saturday.

But the pregnant woman and the female paramedic, who were on board, were harassed and robbed of their monies and mobile phones.

Meanwhile, the Regional Minister-designate has assured residents that the police will work fervently to ensure that the nine robbers who perpetrated the heinous crime are brought to book.

“The police are putting in measures that this incident does not occur again. The stretch is bushy and full of curves that is why these robbers are undertaking these crimes.

“So the police will up its game. It may not patrol every inch of the road but all the measures that need to be taken to ensure that the incident does not occur will be fully implemented,” he said. 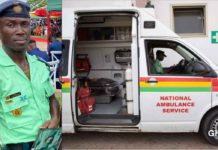