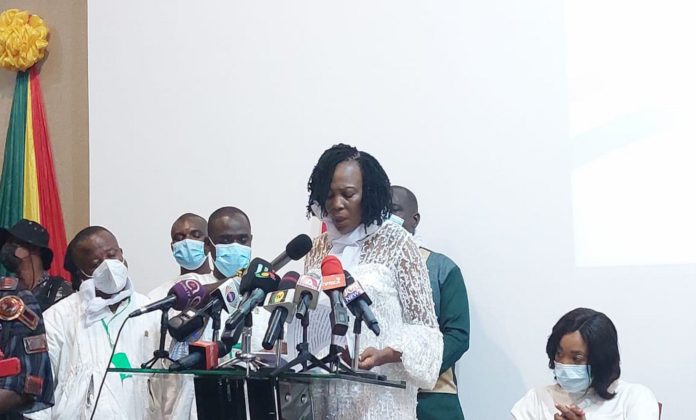 Assembly members of the Accra Metropolitan Assembly have been promised ‘winning bonuses’ after they gave 100 per cent approval to President Nana Akufo-Addo’s nominee for Metropolitan Chief Executive.

The members, numbering 30, all voted Yes for Elizabeth Sackey in the highly patronised confirmation process, which approved her to become the first female mayor in the history of Accra.

Addressing the Assembly Members after the vote, Director of Operations at the Presidency, Lord Commey, said: “We started a conversation yesterday; it is not done. You’ve held up your end of the bargain; now the winning bonus is coming.”

The confirmation of MMDCEs has been characterised by allegations of bribery, rejection and raining of curses on the nominees.

But in the case of the Accra Metropolitan Assembly, despite the spontaneous protests that greeted the President’s nomination of madam Sackey, she was approved without a sweat.

Regional Minister Henry Quartey, who also addressed the Assembly members, reassured them of his commitment to ensuring they received what they had been promised.

“There is no cause for alarm. We told you something yesterday, and we will do it. This is because, for us, we walk the talk. So rest assured that your thing is coming,” he said.

Meanwhile, the Assembly Members themselves say they are highly expectant of the ‘winning bonus’ promised.

One of them, who spoke to Joy News, said, “I’m expecting it [winning bonus]. We all heard him [Lord Commey] promise it; we don’t know what form it’ll take, whether financial or not, but since he has promised, we are expecting it.”