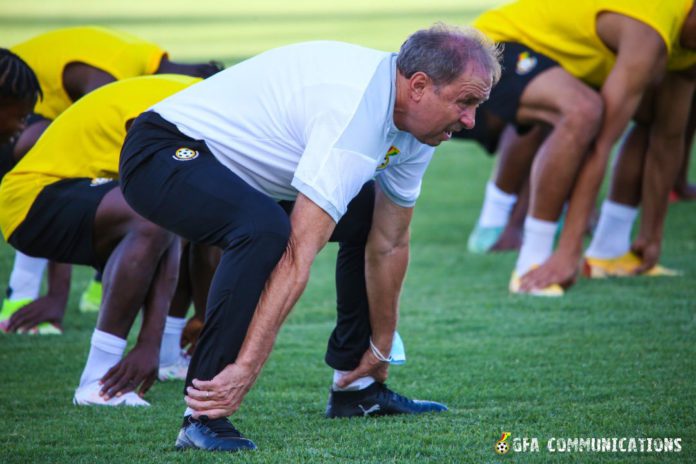 The senior national team, the Black Stars will resume their 2022 Fifa World Cup qualifiers this weekend against the Warriors of Zimbabwe at the Cape Coast Stadium.

After losing to South Africa at the FNB Stadium in Johannesburg in the second group match, the technical team and the playing body were subjected to criticisms by Ghanaians after the players showed lack of desire and fighting spirit.

The pressure from the Ghanaian public led the Executive Council of the Ghana Football Association [GFA] to terminate the contract of CK Akonnor, who was on a two-year deal, together with his two assistants, David Duncan and Patrick Greveraars.

Following the sacking of Akonnor, Milovan Rajevac was re-appointed as the new Black Stars gaffer on a one-year renewable contract. He will be assisted by Otto Addo and Maxwell Konadu.

Having missed out on the last edition hosted in Russia in 2018, the government and the country’s football governing body are bent on ensuring Ghana participates in next year’s global showpiece.

The team officially opened camp on Monday but left for Cape Coast on Tuesday where the game will be played.

A statement by the GFA on Tuesday reads that 27 players have been settled on despite naming an initial 32-man provisional squad. Alfred Duncan, Mubarak Wakaso, among other players have been omitted from the squad for the games.

As part of the team’s preparations, the Black Stars played lower side, Soccer Intellectuals on Wednesday and recorded 8-0 win with Kudus Mohammed, Fatawu Isahaku, Kamaldeen Sulemana all scoring.

On Saturday, October 9, Milovan Rajevac will be in the dugout after 11 years of leaving the shores of the country as the Black Stars host Zimbabwe at the Cape Coast Stadium. Many Ghanaian football fans are eager to see the impact and the blueprint of the new technical team led by Milovan Rajevac.

Despite Mubarak Wakaso scoring the only goal of the game against Ethiopia, the Black Stars were slammed and taken to the cleaners for their abysmal and shambolic display.

Ghana needs to win to keep their qualification hope alive. While the Black Stars play the Warriors, South Africa, who sit top of Group G with four points will play Ethiopia in a doubleheader as well.

During Rajevac’s first tenure, the Black Stars had a ruthless team which could take on any opponent in the world, but this time around the 67-year-old Serbian will miss some of the marquee names that made Ghana a fearsome side under his charge. Nonetheless, he will be expected to inspire the André Ayew-led team to victory on Saturday to put their qualifying campaign back on track.

Saturday’s match will be the seventh clash between the two teams but the first encounter in a World Cup qualifier. Their previous six clashes saw the Black Stars winning three matches, drawing two and losing one.

Ghanaians will remember how the Warriors inflicted a 2-1 defeat on Ghana and denied the Black Stars an opportunity to progress out of the group stage of the 2006 Africa Cup of Nations in Egypt.

Since that upset, Ghana has never had another opportunity to avenge that painful defeat and this game presents André Ayew and his teammates a fine chance to get their pound of flesh, and more importantly revive their World Cup qualifying campaign, having failed to qualify for the 2018 FIFA World Cup in Russia.

For Ghanaians, the stakes are very high and it informed the urgency with which Rajevac was appointed last week with a clear mandate to qualify the team for the Qatar 2022 FIFA World Cup and also win the next Africa Cup of Nations.

Rajevac will have at his disposal the finest Ghanaian players to help him execute his mandate. The return of Arsenal star, Thomas Partey, and Ajax Amsterdam’s Mohammed Kudus from injury is a major boost for the Serbian trainer in whom the FA has placed its faith to turn the team’s fortunes around and restore Ghana’s lost glory.

Skipper André Ayew, Jordan Ayew, Daniel Amartey, Mubarak Wakaso, Baba Iddrisu are among some of the top players plying their trade in Europe who Coach Rajevac could rely on for a winning start on Saturday.

The Black Stars badly need a victory in this game and it also provides an opportunity for the Ghana’s players to step up to the plate to convince the new coach they deserve a permanent spot in the team.

The game has been scheduled to kick off at 16:00GMT. The Black Stars will travel to Harare for the return game in three days’ time.