A thief, who broke into a shop, is in troubled waters as a Closed-Circuit Television (CCTV) has exposed his deeds.

After sneaking into the shop, the thief made away with a sum of GHS 150,000 and all the phones on sale, a viral video captured.

The bare-chested young man searched every aspect of the shop located at Kwabenya Atomic Road, before packing the items of interest into his backpack.

He laid eyes on a vault located in the corner of the shop and took advantage of the fact that it was unlocked.

While dipping the bundles of money into his bag, he was scouting for other items in the showcase and packed them all as well.

As though he knew his whereabouts in the obviously locked shop, the thief took his time to commit the act.

Meanwhile, the shop owner, who released the footage, has announced a GHS 10,000 bounty for anyone with information that can lead to the thief’s arrest. 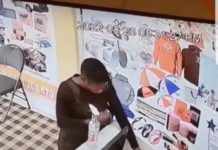 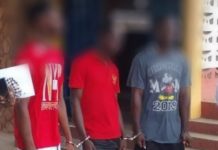