Executive Council member of the Ghana Football Association (GFA), Randy Abbey, believes the allegation of match-fixing has tainted the image of football in the country.

The final day of the 2020/21 Ghana Premier League was soiled with match-fixing allegations.

The Ashgold and Inter Allies fixture that was staged at the Obuasi Len Clay Stadium has dominated the local media after defender Hashmin Musah of Allies scored two own goals to end the game 7-0.

According to Mr Abbey, the current situation presents a fine opportunity for the FA to use its mechanisms to deal with the situation.

“Although in one breath I am happy we have been able to complete a season after a very long time, I am also disturbed and disappointed in the fact the allegations of match-fixing and violence will set the FA back but I am hopeful how the FA deals with this issue will demonstrate its willingness and capacity to deal with such matters in future,” he told Asempa FM on the Ultimate Sports Show.

“The Ghana Football Association will use the Ashgold vs Inter Allies game as a catalyst to deal with the betting issues in our game once and for all,” he added.

Mr Abbey also reiterated that the allegations of match-fixing is unfair to Hearts of Oak, and the other clubs who were not involved in the allegation.

“It might be unfair to Hearts of Oak because in all the allegations I have heard there is non involving Hearts of Oak, so if you look at it from who won the league, the top four and the other positions, it might be unfair, but if you look at it from the point of view of the competition with all the allegations, it taints the competition.

“We have completed the season with a winner, and there is no evidence to suggest those positions have been compromised,” he noted.

He also maintained that match-fixing goes against the integrity of the game and has the tendencies of taking away the competitiveness of football.

“Match-fixing goes against the integrity of the competition, that is why we must go deep into this issue and if there are culprits, we find them and deal with them, so the GFA will deal with them with the relevant regulations, and let the Police deal with the criminal aspect of the issues,” he added. 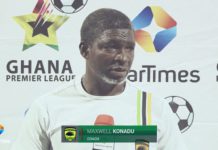 Boadu, Barreto and Kuuku Dadzie nominated for coach of the month award

GPL: Gama, Boakye, two others nominated for Player of the Month award