This was at a short ceremony at the Jubilee House on Friday, October 8, 2021.

The ceremony was graced by Vice President Dr Mahamudu Bawumia, top officials from the Police Service, and other security agencies as well as high-profile personalities.

His wife and six children were also in attendance to throw their support.

The President, speaking at the ceremony, charged Dr Dampare to establish a service that will win the confidence of the public.

Dr Dampare, who becomes the 23rd IGP of the country and the youngest since independence, pledged to establish a world-class police service.

Check out more photos below: 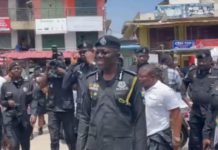 Samini to be sworn in as GIMPA SRC president