The Electoral Commission (EC) says the Biometric Voter Registration kits being used for the compilation of the Voters Register are all new.

It explained that as part of its procurement of a new Biometric Voter Management System, it bought 8,500 Biometric Voter Registration Kits and all of these kits had been deployed to the field.

Therefore, it said, the assertion by some individuals that 40 per cent of the BVR Kits being used were the old Kits, was an outright lie.

A statement, copied to the Ghana News Agency, in Accra, on Thursday, said the new Kits were completely different from the old ones in terms of look, appearance and functionality.

For instance, it said, the new ones were smaller and had three handles; while old had one.

It explained that the new kits also had an ID number and QR Code and could not be removed from the case; while the old version had no ID number and was removable.

Additionally, the new kits could print out daily systems that made data collection easy and had charging points in the front with two led alerts light; but the old one did not have such features.

“For the information of the general public, all the Kits being used for the registration exercise are brand new,” it emphasised.

“There is not a single old absolute Kit in the field. One would have thought that the individuals making the assertion would have indicated in the report where they saw the old Kits being used.”

The Voters Registration Exercise, which began on June 30, and will end on August 6, is in its third phase.

It is taking place in more than 33,000 registration centres under a cluster system arrangement where a registration takes six days at each centre.

More than 4.5 million applicants have been registered out of the targeted 15 million voters. 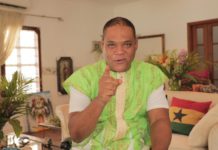