The Akwamuhene of Akyem Awisa in the Eastern Region, Nana Yaw Barima Twum Sarkodie I, has entreated Ghanaians to be united and support leaders in the country including chiefs and those in government to bring about development.

He underlined that unity means being together for one another in “thoughts, feelings, actions and reactions,” especially “once we are united, we share the same feelings, sympathy, ideas, tangible and intangible resources.”

He was speaking as the Guest of Honour, at the grand durbar of Adehyedae Kɛse Festival 2022, at the forecourt of Anum Ampene Kotoko Ahenefie, Asamankese.

The festival, which was used to raise funds in aid of palace projects, was on the theme “3 Years of Exceptional Leadership; Uniting the Citizens for Development.”

Unity, he stressed, is strength, adding that “it is in this strength that we support each other to achieve development.”

“To develop in unity would mean that we support our chiefs, elders and leaders in society in their development agenda. We must eschew individualism and respect each other’s view whiles we take our time to state our positive positions devoid of insults, emotions, sentiments and insinuations,” he advised.

According to him, the objective of modern-day chieftaincy is to bring development to the people.

He said this can only be realised through the total support in unity of the same people “we intend the development for.”

“Development starts from the mind; let us therefore begin from today to change our mindset towards development in unity and the rest would be history. You are fortunate enough to have a chief whose quest for the development of his people and society is unmatched,” he charged.

He told his people that all that is needed from them was their support in unity. 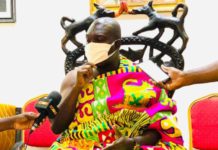