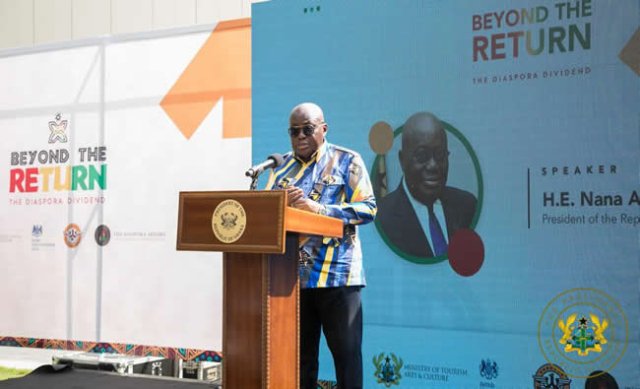 The President, Nana Addo Dankwa Akufo-Addo, has launched the ‘Beyond the Return’, The Diaspora Dividend’ Initiative, at a brief ceremony at the Kempisnki Hotel in Accra.

As the ‘Year of Return’ draws to a close, President Akufo-Addo said the rationale of ‘Beyond the Return’ is to “engage Africans in the diaspora and all persons of African descent more positively in areas such as trade and investment co-operation, and skills and knowledge development.”

In September 2018 at the Washington Press Club, in Washington D.C., the President proclaimed 2019 as the ‘Year of Return.’

Its purpose was to commemorate the 400th anniversary of the time when the first 20 West African slaves were brought to the Commonwealth of Virginia, which subsequently became part of the United States of America, thereby initiating one of the most unfortunate and barbaric episodes of human history – the Trans-Atlantic Slave Trade.

With 75 percent of the slave dungeons built on the West Coast of Africa, through which the slaves were transported, located in Ghana, the President said the country believes it has a responsibility to extend a hand of welcome back home to Africans in the diaspora.

“It was our hope that the ‘Year of Return’ would be a joyful and learning experience all round for all of us on the continent and our kith and kin from the diaspora, especially in affirming our determination that never again should the African peoples permit themselves to be subjected to such dehumanising conditions, sold into slavery, and have their freedoms curtailed,” he said.

President Akufo-Addo continued, “it has proven, so far, to be just that, with some 200,000 more visitors taking up the offer to visit Ghana during the year.”

The Ghana Tourism Authority, the implementing agency under Ghana’s Ministry of Tourism, Arts and Culture, will be at the forefront of bringing all stakeholders together, in what will be a focused drive at the empowerment of black people, using Ghana as the hub.

President Akufo-Addo urged diasporans to change the African narrative, which has been characterised largely by a concentration on disease, hunger, poverty and illegal mass migration.

“Let us all remember that the destiny of all black people, no matter where they are in the world, is bound up with Africa. We must help make Africa the place for investment, progress and prosperity, and not from where our youth flee in the hope of accessing the mirage of a better life in Europe or the Americas,” he said.

That, according to the President, is what ‘Beyond the Return’ will seek to do, “so we can derive maximum dividends from our relations with the diaspora in mutually beneficial co-operation, and as partners for shared growth and development.”

Citing the contribution of Chinese diasporans to the growth of China’s economy, President Akufo-Addo noted that when foreign companies, in the late 1970s, reduced their investments in China, it was the Chinese Diaspora that shored up the economy.

According to the Washington D.C. based Migration Policy Institute, half of the foreign direct investment, i.e. $26 billion, that transformed China into a manufacturing powerhouse in the 1990s, originated from the Chinese Diaspora.

“That is why I am excited and keen on this new initiative of ‘Beyond the Return’, and the renewed enthusiasm around building Africa together. Let us imbibe in ourselves a deep consciousness and understanding of the goals and history of the African peoples,” he said.

The second half of the 20th century, President Akufo-Addo added, witnessed a great blow for human freedom and progress, when the African peoples, in the wake of Ghana’s shining example, liberated themselves from the colonial and imperialist yoke and the racist ideology of apartheid and emerged as free, independent peoples to construct new nations of hope and advancement.

“The first half of the 21st century should consolidate this development, and see the growth of modern, prosperous, technologically-advanced nations, within a united Africa, which would make a reality of the dream of the 21st century as the African century, and bring dignity and respect to black people all over the world,” the President said.