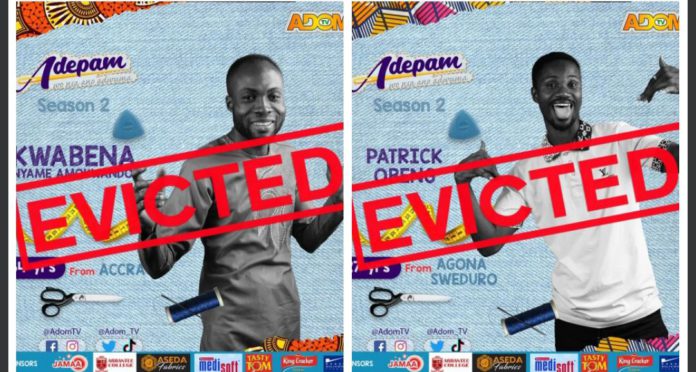 Two contestants have been axed from the Season Two of Adom TV’s ever educative fashion show Adepam as the competition enters Week 4.

Kwabena Nyame Amokwando under the brand name Onyameous was the first of the 12 contestants to taste eviction before being followed shortly by Patrick Obeng.

This leaves 10 contestants; six males and four females to battle for the envious tag as winner.

Onyameous is a 34-year-old resident of Accra and he was the contestant number 6 in the competition.

For the first task, the signature couture look, he made a semi-detachable gown made from a shiny blue-black fabric.

The tail can be reversed to expose a short skirt lying effortless beneath the gown. He complemented the look with some beadwork.

During Week 2, Onyameous presented a two-toned jumpsuit that the judges and audience could not have enough of.

One side of the jumpsuit was made with brown fabric and the other with white as the entire front part was adorned with beads.

The judges described his style as the best presentation he has made as they call for a round of applause for him.

Week 3 came with a different twist as the contestants were tasked to make a decent beach wear for a plus size model.

Patrick Obeng, on the other hand, has brought pride to the people of Agona Swedru where he hails.

Despite his few years in the fashion industry, the 24-year-old brought his A game to the competition.

Week after week, he made presentable and creative outfits, but votes did not go in his favour.

He is the only contestant who made an ensemble for a male model in Week 3 of Adepam Season 2.

He presented a three-piece signature wear which redefined the African look and made it outstanding.

In Week 2 he made the audiences drool over his colourful shirt and shorts which best describes the signature ready-to-wear theme.

He made a perfect blend of nude fabric and African prints.

His last style in the show is a three-piece beach wear and a hat he made for his plus size model.

The two have left an indelible mark in the competition.