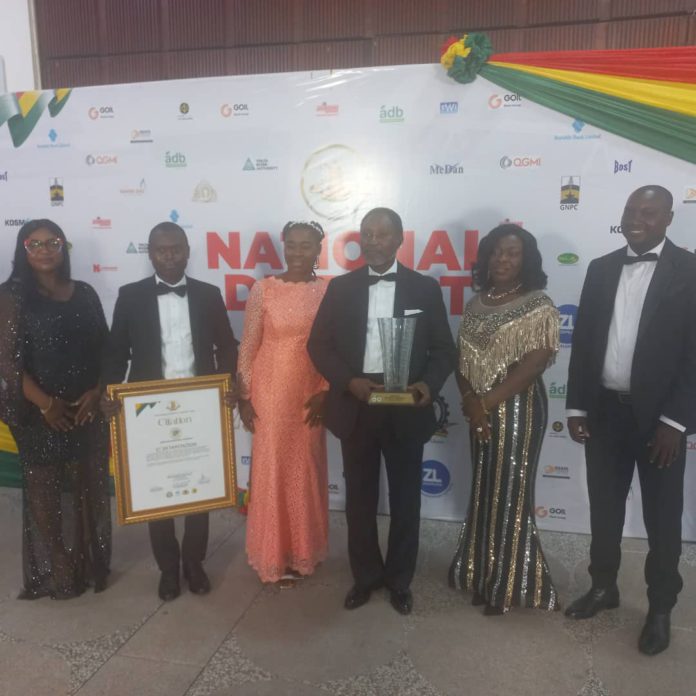 The Adentan Municipal Assembly in the Greater Accra Region last Saturday was adjudged the cleanest district in Ghana at the maiden National District Awards.

Adentan emerged as the first district insanitation based on the 2021 District League Table.

The award was instituted by the Millennium Excellence Foundation (MEF), in collaboration with the National Development Planning Commission (NDPC) with support from the United Nations Children Fund (UNICEF) and focused only on the Water, Sanitation and Hygiene (WASH) sector.

Held in Kumasi on the theme: ‘Accelerating National Development Through Excellence in Local Governance’, the award was aimed at engendering competition among district assemblies in the country for improved performance.

It is also to serve as a motivation for policy makers to provide even and equitable resources to the less developed assemblies and put in place measures that would improve the general wellbeing of the population at the sub-national levels.

The Mampong Municipal, Mamprugu-Moagduri District and Atiwa East District assemblies emerged first, second and third, respectively, as the most improved districts in Water and Sanitation during the period under review.

Speaking at the ceremony the Chairman of NDPC, Prof. George Gyan-Baffour, said the award was not an assessment of the performance of the district chief executives per se but to serve as a yardstick for other districts to emulate while “at the same time encouraging the performing districts to shine.”

He said the commission believed that the introduction of the award scheme would strengthen and deepen options by encouraging the districts and the authorities to work towards achieving high performance in the delivery of quality service to the citizens, particularly in the area of water and sanitation.

“Beyond this, we believe it will trigger support to address the disparities in WASH and other key development are a sand sustain the gains made in order to achieve the Sustainable Development Goals on clean water and sanitation,” he said.

On behalf of the commission, Prof. Gyan-Baffour expressed his gratitude to the MEF under the auspices of the Asantehene, Otumfuo Osei Tutu II, and UNICEF for the laudable initiative which he believed would give substance and visibility to NDPC’s monitoring and evaluation functions.

In his remarks, the Municipal Chief Executive of Adentan, Alexander Nii Noi Adumuah, was grateful to the foundation and NDPC for recognising the efforts of the assembly in ensuring that the people had access to WASH related services within the municipality.