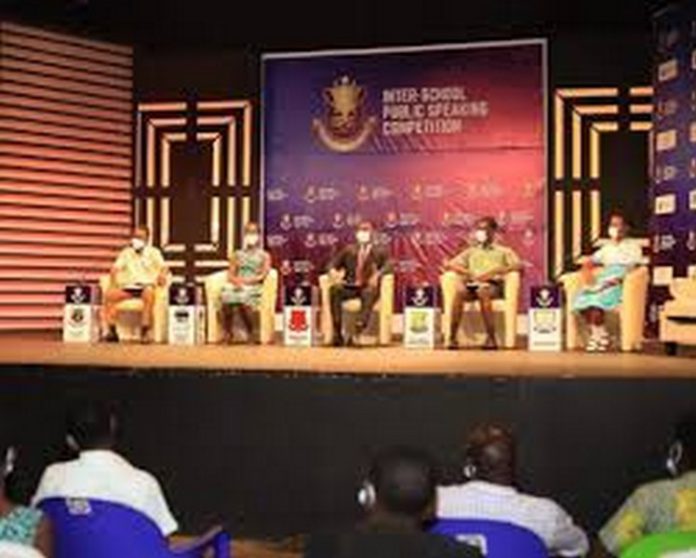 Achimota’s Desiree Nhyira Hayfron has been adjudged the best orator in the maiden Inter-School Public Speaking competition for the year 2020.

With confidence and clarity of thought, Desiree excited the audience and the judges with her eloquence beating off competition from Ekow Nhyiraba Awotwi and Asante Enoch Kwakye of Mfantsipim School and Pope John SHS and Minor Seminary who were the first and second runners up respectively.

In what was an enthralling final which also had Osei Kumi Emmanuela from Sunyani SHS and Elsam Antwi of Opoku Ware School all competing, the finalists turned what should have been a tension-filled performance into an easy talking session in a salon.

With the general  theme: “Silencing the guns; the peace of Ghana is in my hands before, during and after the elections” the finalists each had the opportunity to pick an issue that had to do with the upcoming General elections in Ghana and the need for peace.

Desiree picked “the role of children in peace building” and with passion she sounded an altar call, challenging children to rise up for a peaceful election or become the victims when the guns rule.

Other topics which were equally treated with mastery by the other competing students include; “Four years is not enough to assess a government”; “Ethnocentrism is a sole factor that decides political decision making.” “Protests in the West African Sub-Region, a call for reform of our electoral systems.”

The finalists also had the opportunity to discuss their understanding of the major theme of the competition.

After assessing, the five finalists based on their power of oration, diction, gesticulation, coherence of arguments, three judges Rita Benewah Yali Deputy Director Administration and HR of Ghana Peace Council; George Tawia Tata, Director of Data Collection and monitoring GES Ga Central and Prince Moses, Head of Business at Asaase Radio settled on three with Desiree being the overall winner.

Organisers of the competition DeeDee Global and its CEO Bertha Amanor were thoroughly excited about the performance of the finalists as well as all contestants who found courage to compete from the beginning.

According to Bertha even though they had planned a more rigorous competition in the beginning of the year, Covid came and their plans nearly took a fatal turn.

But with poise, passion and the determination to build the power of oratory in the young students as well as get them involved in clamouring for peace in the upcoming election, they decided to explore the virtual competition.

“That option brought a lot of creativity among the students,” she said, adding, over 50 schools took part in the competition at different stages.

She was hopeful the subsequent competitions will be bigger than the maiden edition and thanked the Ghana Peace Council, the Ghana Education Service for their support as well as Vodafone Ghana Foundation, Coca Cola, SpeakUpp, Passion Air, and Sika Krabea distributors of Lele products.