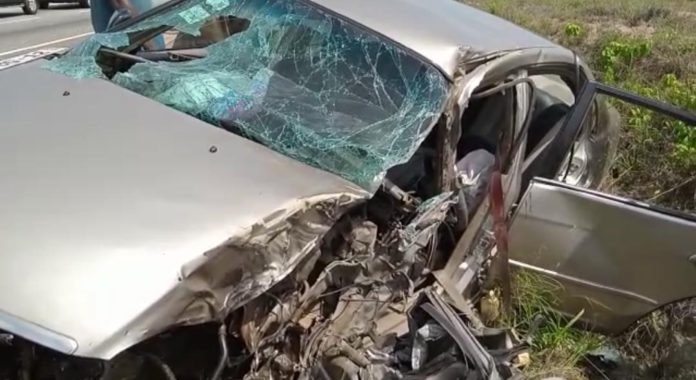 Fifteen passengers are in critical condition while 14 other persons have sustained various degrees of injuries in an accident involving three vehicles at Gomoa.

Per police accounts, the accident involved a Toyota Salon car with three persons, 2 persons onboard a Kia Rhino, and a Benz sprinter bus transporting 27 passengers.

According to the driver of the Kia Rhino car, the Toyota salon car tried overtaking his car before skidding into the opposite lane after a failed attempt.

While trying to find its balance, the Toyota car was said to have rammed into the sprinter, causing it to somersault.

The trapped passengers of the sprinter car were rescued through the windows, but it took more effort by some residents to cut through the driver’s side before setting him free.

The driver of the Toyota Salon car also suffered a slash in his head and face, as some eyewitnesses said he had one eye missing when he was rescued.

Even though no death was recorded, fifteen persons, mainly from the sprinter and salon car, including both drivers, are in critical condition.

Fourteen others survived with minor injuries, but the occupants of the Kia Rhino car were fortunate to escape unscathed.

The victims have been rushed to Winneba Trauma Hospital with the help of the police who arrived on the scene.