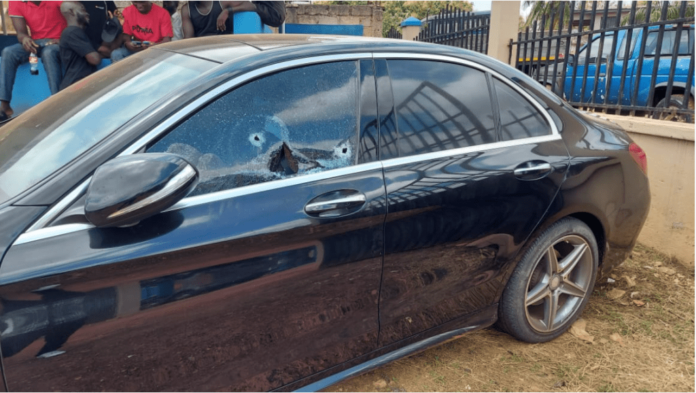 A 23-year-old student of Oyoko School of Dispensing Optics has been shot dead by unknown gunmen in Kumasi, Tuesday evening.

Kwabena Asumadu met his untimely death shortly after dropping off his friend at Sofoline around 11:00 pm.

The deceased, who was driving an unregistered Mercedes-Benz, was shot multiple times by his assailants through the driver side.

He was returning to Offinso when the unfortunate incident happened.

He sustained gunshots wounds on his neck and head before dying.

Police sources say, nothing was stolen from him.

Friends of the deceased, who stormed the Suntreso District Police command, are yet to come to terms with the passing of the young man.

“Kwabena was a calm and reliable friend. He didn’t have qualms with anyone because he is someone who immediately apologises to people he offends. We just can’t understand why someone will do something like this to him. We are pained but God knows best,” a friend of the deceased, Addai Derick stated.

Though no arrest has been made, police have commenced investigation to arrest all persons involved.

The body of the student has been deposited at the Komfo Anokye Teaching Hospital morgue for autopsy.