Defending champions, Hearts of Oak, have been eliminated in the ongoing 2022/23 MTN FA Cup following their defeat to Dreams FC at the Accra Sports Stadium on Sunday.

The Phobians suffered a 1-0 defeat against Dreams FC in the Round of 32 games.

Agyenim Boateng scored the only goal of the game for the Still Believe lads.

Slavko Matic’s men were handed a golden opportunity in the 97th minute of the game after being awarded a penalty.

However, Samuel Inkoom failed to convert despite two attempts from the penalty box.

Elsewhere, Asante Kotoko at the Baba Yara Stadium survived a late scare from Division One side Benab FC to record a 2-1 victory.

The Porcupine Warriors went ahead through an own goal from Benab, who played as the home team on the day.

However, the lower tier side were levelled after the break and looked certain to cause an upset but Maxwell Agyemang turned up big late in the game to restore Kotoko’s lead.

The win sees Kotoko advance to the next round of the MTN FA Cup. 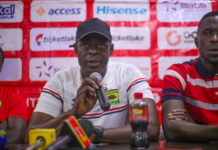 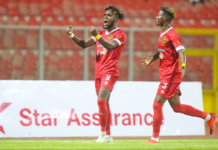 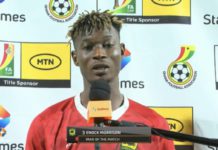