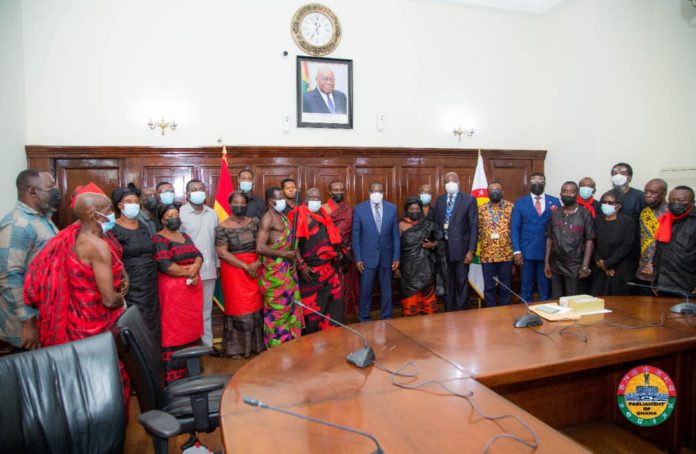 The family of the late Elizabeth Asantewaa, victim of 1964 Kulungugu bomb attack, has paid a courtesy call on the Speaker of Parliament, Alban Bagbin.

The visit was on Tuesday to officially inform him about Madam Asantewaa’s passing and the burial arrangements.

Little Asantewaa, who was used as a conduit to carry out a heinous bomb attack on Dr Kwame Nkrumah, died on June 2, 2021.

She became a bomb explosion victim in 1964 when she was asked to present a bouquet to President Kwame Nkrumah.

Unknown to her, the bouquet had been bomb laced and detonated as she presents it to Dr Nkrumah.

Little Asantewaa, despite surviving the attack, was not the same after the incident as one of her legs was amputated, and has since lived on the other.

She was later taken to the United Kingdom by Dr Nkrumah where a she got fitted with a prosthetic leg.

Later, General Kutu Acheampong also got her another prosthetic leg.

Sadly, that was the extent of the help she got after losing her limb in the tragic accident.

With shattered dreams and a disfigured face, Madam Asantewaa’s other leg was fast rotting by the day, thereby, compounding her woes.