Around 11km outside the city of Siauliai in northern Lithuania, an old, earthen mound hunches under the weight of thousands of crosses. As the wind blows across the fields of rural Siauliai County, ornate rosaries clink against metal and wooden crucifixes, filling the air with eerie chimes.
Known as the Hill of Crosses, the mound’s history is a complex narrative of wars and uprisings. Ancient legends, mysterious visions and accounts of haunting surround the hill, and its exact origins remain a mystery to this day.

The Hill of Crosses is a Lithuanian pilgrimage site with mysterious origins (Credit: Paul Stewart)

“The hill has many secrets,” said Vilius Puronas, a local artist and historian. “According to folklore, there was once a church where the hill now stands. During a terrible storm, lightning struck the church and the tempest buried it under sand and rock with everyone still inside. Locals say that you can glimpse a ghost procession of monks at the foot of the hill at sunrise. Throughout the ages, magical appearances, visions of saints and sightings of ghosts have been a part of the hill’s history.”
Another legend says that in the early 1300s, the hill served as a platform for a wooden castle manned by the pagan barons of Samogitia, once a state in the former Grand Duchy of Lithuania. In 1348, the castle was destroyed by the Order of the Brothers of the Sword, German warrior-monks tasked with the Christianisation of Livonia (what is now Latvia and Estonia). Many believe the Samogitians who survived the battle piled their slain comrades’ bodies together and buried them, thus forming the mound. Like those of the monks, the souls of the fallen pagan warriors are said to still haunt the hill at night.

One legend says a desperate father planted a cross on the hill to save his dying daughter (Credit: Paul Stewart)

However, the most renowned story of the hill’s creation is the tale of a desperate father whose daughter suddenly fell gravely ill. As the girl lay on her death bed, the father had a vision of a woman who told him to make a wooden cross and place it on a nearby hill; if he did so, she said, his daughter would recover. In the morning, the despairing man hurriedly carved a wooden cross and rushed to the hill. When he returned home, his daughter greeted him at the doorway, perfectly well again. Ever since, people have been leaving crosses in hope their prayers will be answered.
Yet not every cross has been left by an optimistic pilgrim – some are instead reminders of quiet rebellion. After surviving medieval sieges by the invading German crusaders and 19th-Century uprisings by Lithuanians against Russian Tsar Alexander II, the Hill of Crosses faced its most aggressive threat: the Soviet Union.
In an effort to stamp out Christianity in the Eastern bloc, the Soviet government attempted to level the hill numerous times during the 1960s and ‘70s: they bulldozed it, burned the wooden crosses and removed the metal and stone ones for scrap and construction. People who brought crosses to the hill were fined and incarcerated.
But the crosses on the mound just kept multiplying, left in the dead of night as an act of defiance against religious oppression. Now, more than a quarter of a century after the fall of the Soviet Union, the crosses still stand.

The site has become a magnet for pilgrims of all denominations (Credit: Thierry Monasse/Getty Images)

In the years since, the site has become a magnet for pilgrims of all denominations – Christian crosses stand beside carvings bearing Jewish inscriptions and words from the Koran.
“The Hill of Crosses doesn’t really belong to anyone, and thus belongs to all,” Puronas said. “Neither church nor government has any claim to it, and people bring crosses here not because they are told to, but because they feel inspired to.”
The Hill of Crosses, minimally maintained by the municipality of Siauliai and local Franciscan monks, is now covered in more than 100,000 crucifixes and other religious icons – and the number is constantly increasing.
“For some people, the Hill of Crosses is a place of contemplation and prayer. For others, it symbolises defiance and resistance in the darker times. And for others still, it’s an extraordinary occurrence in the humdrum of the ordinary life. None of them are wrong,” Puronas said. 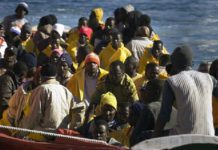 More than 35,000 Ghanaians in Lybia to cross the sea to Europe

The world’s most welcoming countries