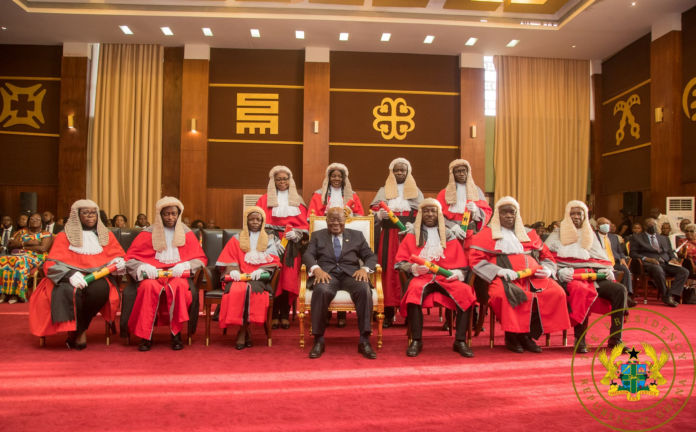 President Nana Akufo-Addo on Monday inducted into office 10 new Justices of the High Court, charging them to dispense justice without fear or favour, affection or ill will.

The Justices included Ebenezer Osei-Darko, Bernard Bentil, Alexander Graham, and Mercy Adei Kotei, who were all elevated from the Circuit Courts.

At a short ceremony at the Jubilee House, Accra, President Akufo-Addo congratulated them on their well-deserved appointment, and enforced the need for them to demonstrate honesty, integrity, and sound knowledge of the law to gain the confidence the people.

He urged them to eschew all forms and temptations of corruption throughout their journey as judges of the Superior Court of Judicature because “a corrupt or incompetent judge is a danger to the public interest and judicial administration.”

The President reminded the justices that the high court was the focal point for justice delivery in the country, adding “much of judicial work begins and ends there.”

“It is therefore critical for the growth of the nation that the High Court commands the respect of the people by the quality of its judgements as well as the comportment of its judges,” he stated.

President Akufo-Addo admonished the judges to avoid proffering judgements on the basis of decisions from lower courts and to employ the time-honoured common law tradition of precedence as the foundation for the coherent development of the law.

“You must be learned, know your case law, and ensure your decisions and judgements are properly motivated,” he said.

The President reinforced the fact that the dispensation of justice required that the application of the laws of the land must occur without fear or favour, affection or ill will, and without recourse to political, ethnic or religious affiliations.

“When a citizen falls foul of the law, that citizen, high or low, must be dealt with accordingly, and the law enforcement agencies including you our new judges must ensure this is done…that is the true meaning of the concept of equality before the law”

President Akufo-Addo also encouraged the judges to leverage technology to expedite the conduct of cases that came before them and in the management of the Courts.

He emphasized that the transparent and efficient delivery of justice builds confidence in citizens, businesses and the investor community.

The Government, the President told the Judges, had taken note of the inadequate numbers of courts in various parts of the country, resulting in citizens travelling long distances to gain access to courts, and had decided to remedy this situation.

To that end, 60 district courts, 60 bungalows for judges, and three new high courts for three of the six newly created regions would be commissioned before the start of the legal year in October.

Additionally, Government, through the Administrator of the District Assembly Common Fund, is constructing 100 new courts and bungalows for Judges in all 16 Regions of the country.

Justice Mercy Adei Kotei who spoke for her colleague justices expressed gratitude to the President for the confidence reposed in them and pledged that they would work to justify their elevation.

“We promise to remain true to our oaths and to discharge our duties with diligence,” she said.