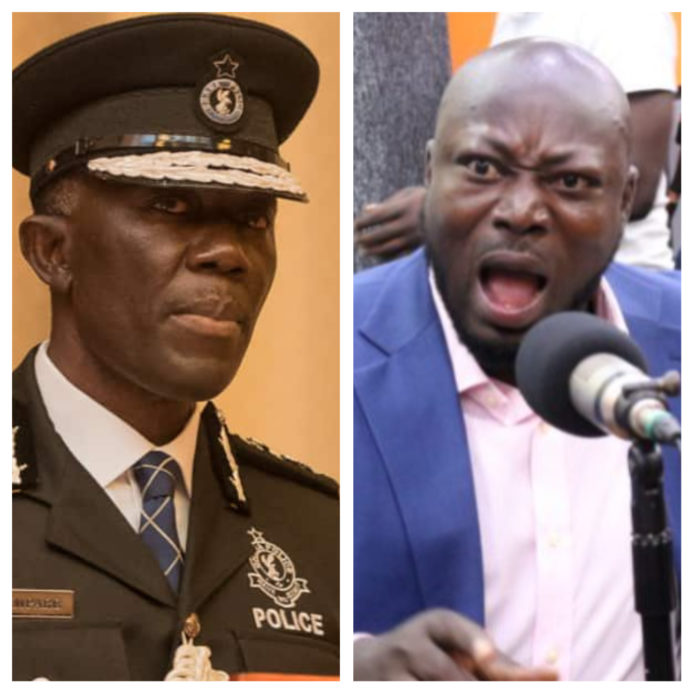 The National Youth Organiser of the National Democratic Congress, George Opare Addo, has accused the Inspector-General of Police of turning himself into “a puppet of a corrupt regime”.

Mr Opare Addo, popularly known as Pablo’s accusation comes on the back of a restraining order secured by the Ghana Police Service to stop an impending demonstration by the pressure group, Arise Ghana.

He has described the order as a smokescreen choreographed to deny overburdened and suffering Ghanaians from venting their frustrations about the corrupt Akufo Addo/Bawumia government through street protest.

Pablo, without mincing words, said the IGP, Dr George Akufo Dampare, has carved an unenviable niche for himself as someone comically interested in protecting a gang of thieves in government rather than the very poor people whose taxes he is feeding on.

The Youth Wing of the National Democratic Congress has become aware of a press statement by the Ghana Police Service unashamedly communicating its decision to use the Court to thwart a planned demonstration by pressure group, Arise Ghana.

The reasons stated in the Police statement for desperately seeking a restraining order from the Court, on the face of available facts, are only smokescreen choreographed to deny overburdened and suffering Ghanaians from venting their frustrations about the corrupt Akufo Addo/Bawumia government through street protest.

While the Inspector General of Police, Dr George Akuffo Dampare enjoyed the goodwill of Ghanaians when he was appointed, and exhibited traits of an upright officer ready to honour the tenets of his profession, he has turned out to be a puppet of a corrupt regime.

Annoyingly, the IGP, without mincing words, has carved an unenviable niche for himself as someone comically interested in protecting a gang of thieves in government rather than the very poor people whose taxes he is feeding on.

A trivial issue as the scheduled time for the Arise Ghana demonstration could have been settled with organizers without necessarily resorting to a last-minute crude tactic to frustrate the organizers.

Indeed, the organizers, from media reports, have so far cooperated with the Police and had even acquiesced to demands by the Police to change the scheduled time to a proposed one by the Police.

If the Police had a change of mind on the agreed time with the organizers, what prevented the IGP or his lawful assigns from re-engaging the organizers to find a middle ground?

More so, on what account did the Police change its mind at the last minute to break ranks with the organizers? This unholy behaviour by the Dampare-led Police administration speaks to one undeniable fact – that the Police hierarchy, against the wishes of some of its junior officers, has sworn to fight any well-meaning Ghanaian who dares question the wanton dissipation of scarce resources by the reckless Akufo Addo/Bawumia government.

We would not be surprised that the Police hierarchy has taken up this unpatriotic hatchet job because they are accomplices in the unreasonable raping of our dear country.

A protest such as the Arise Ghana demonstration should and must be embraced by every Ghanaian who wishes this country well.

The only adversaries would be the criminals in government looting the State, and sadly, the Police hierarchy appears to have gleefully joined them as their protective cover.

If the Akufo Addo/Bawumia government has performed to the satisfaction of all, why would it be remote-controlling the IGP to block a peaceful street protest?

History has it that failed governments, like the Akufo Addo/Bawumia government, always resort to weakening of otherwise independent State institutions in order to have a field day to steal without anyone raising a winker.

We can assure the Akufo Addo/Bawumia government that the IGP and his cohorts may be in bed with them today, but the day of reckoning where the Ghanaian people would say ‘enough is enough’ is now here with us.

We urge organizers of the Arise Ghana demonstration not to be unsettled by the cowardice tactics by the Police and government.

The resolve by all young people of our Country is that the Akufo Addo/Bawumia government has lost track on its promised deliverables and must be kicked out.

We stand in solidarity with the organizers and would lend all support where necessary to ensure Ghanaians rise in unison against this tyrannical government.