An unvaccinated woman who ‘died’ eight times after being hospitalised with Covid has urged other Brits to get the jab.

Gemma Roberts’ heart stopped repeatedly while doctors battled to save her life as she fought Covid and two bouts of sepsis.

She now sorely regrets refusing to get the jab before she fell ill – and said she is only alive today thanks to the medical staff at Warrington Hospital.

The 35-year-old’s ordeal began when she was rushed to hospital in August and placed on a ventilator, which she stayed on for two months.

She told The Mirror: “I remember saying to doctors and nurses ‘please don’t let me die’.

“Before I was put to sleep I rang my partner Sophie and said ‘they are having to put me to sleep but I’m going to be okay.

“But there were moments when I thought ‘I could be a goner here’. I wish I had the vaccine before, I think everyone should have it now.

“I was one of those people that was scared of having the jab. I heard it had killed people.

“I took a chance and I almost didn’t pull through. Medical professionals saved my life, that’s who I will listen to now.

“I feel guilty because of what I put my family through with them not knowing whether I was going to wake up.”

Gemma said she is eternally grateful to one of her nurses, Collette Thomas, who told her throughout that she was going to survive.

“She said it from the start. I knew in my head she couldn’t make that promise but it comforted me at the time,” Gemma said.

The former Eddie Stobart worker, who was due to start a new job when she fell ill, also fought off two bouts of sepsis in hospital.

Her partner Sophie Holmes, 39, said it sparked a rash across her body which left her ‘looking like she had been scolded’.

Gemma’s ordeal began at the start of August when a Covid lateral flow test came back positive, with a subsequent PCR test confirming the result.

“At first I thought it was just a hangover as I had been at a wedding the weekend before. But then I tested positive,” she said. 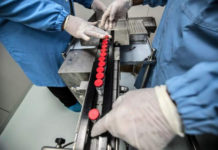 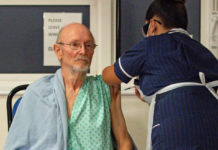