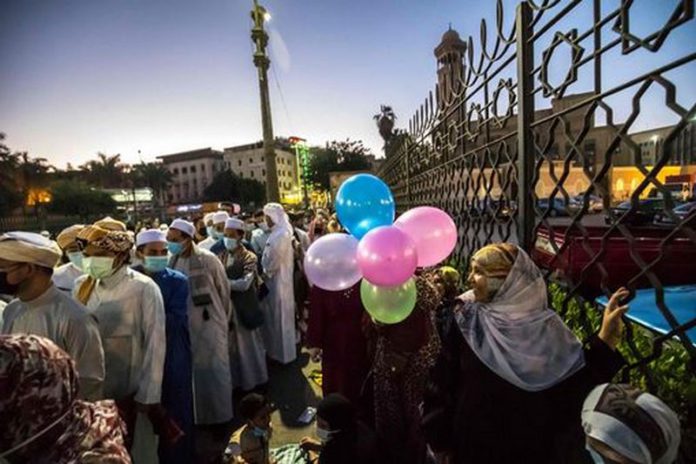 Muslims in the United Kingdom and around the world are celebrating Eid under coronavirus restrictions for the second year as Ramadan comes to an end.

Thursday marks the end of a month of fasting and the start of the festival known as Eid al-fitr, the breaking of the fast.

Under normal circumstances the day begins with morning prayer at a mosque followed by the coming together of friends and family to enjoy food and each other’s company.

This year, for the second year, celebrations will be restricted due to coronavirus rules and guidance.

Friends and family can, however, meet outdoors in groups of six or in two households, which last year was not possible.

Why are there two Eids a year?

There are two Eids celebrated each year in the Islamic calendar.

Today Muslims will celebrate Eid al-Fitr, which is also known as the festival of breaking fast.

It is typically celebrated at the end of the Muslim month of fasting, called Ramadan.

The second Eid, called Eid al-Adha, which is also known as the “festival of sacrifice”, is marked around two months later at the same time when many Muslims perform the Hajj pilgrimage.

How Eid will be different this year

The Muslim Council of Britain said many of the usual festivities, including large indoor gatherings, will not be possible due to the Covid-19 restrictions in place across the UK.

However, people can still take part in Covid-19-safe Eid prayers at their local mosque as some remain open with social distancing measures in place.

Two families or groups of six can also gather outdoors. Before the Covid pandemic, Muslims would celebrate Eid by having big gatherings and feasts.

“There’s always some sort of tradition that runs through each family.”