Former Chief Executive Officer of the Volta River Authority (VRA), Charles Wereko Brobbey, has petitioned the Speaker of Parliament, Alban Bagbin to call on the House to suspend the payment of monthly allowances to incumbent spouses of the President and his Vice.

In a letter to the Speaker, Dr. Brobbey stated that given the uncertainties about the legalities, it would be prudent to suspend all budgetary allocations, disbursements among others until the Supreme Court has determined the constitutional propriety of Parliament’s decision to pay salaries to the presidential spouses.

He wrote, “if indeed Parliament has approved such payments, I will be grateful if you could educate me as to the legal authority that underpinned Parliament’s action.”

“As far as I know, neither the first nor second ladies are elected offices or appointed under article 71 of the 4th republic of the constitution. It is my contention that every payment charged to the consolidated fund must be in line with the laws of the country.”

Dr. Brobby’s comment comes after Parliament in January 2021, approved the Prof. Baidu Ntiamoah Committee’s report recommending emoluments for the executive, judiciary, and legislature. The committee’s report also made provisions for the spouses of the president and vice president to be paid salaries.

The move to formalise the payment of salaries to the First lady and Second lady gained massive attention on social media with many against the idea.

However, the Information Minister, Kojo Oppong Nkrumah, explained that the payment of allowances to spouses of Presidents and Vice Presidents is not a new phenomenon.

He stated that the payment was instituted under the Kufuor administration, but was only being formalised by the current government.

Vice-Chairman of Parliament’s Finance Committee, Patrick Yaw Boamah also defended the House’s decision to approve payment of emoluments to the spouses of the President and Vice President.

According to him, Mrs. Rebecca Akufo-Addo and Mrs. Samira Bawumia, all contribute their quota to the development of the country and also support their husbands to achieve the ambitions set for the nation.

Mr. Boamah said after seeing the figures of the supposed emoluments, he is of the view that the amount to be paid is nothing “extraordinary”.

However, Dr. Brobby believes that Parliament is formalizing an illegality by approving the Emoluments Committee’s report to pay spouses of the President and the Vice President.

“In my view, the notion that Parliament is just formalizing an illegality is untenable,” he wrote. 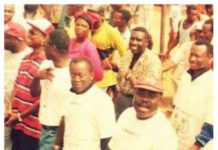