The Still Believe boys who have impressed in the second half of the season were hosted at the Obuasi Len Clay Stadium in the matchday 23 games.

On the 38th minute, Dreams broke the deadlock with Agyenim Boateng slotting home from the spot after Brazilian import, Fabio Gama handled the ball in the goal area.

The home team then took the lead for the first time in the match after Abdul Ganiu Ismail converted a penalty in the 57th minute.

Substitute Francis Andy Kumi completed the comeback for Kotoko in the 78th minute.

Vladislav Viric who was not enthused with the penalty awarded to Kotoko for their second goal expressed sadness about the state of officiating.

“It’s very interesting how eleven against eleven players and some being on the bench,” he said after the game.

“Because the game will be a better game, they call some people to help them.

“They are in Black you know, to help them be better game.

“And they weren’t helping today and I’m so sad,” Vladislav Viric added.

The win has sent Asante Kotoko to the top of the Ghana Premier League table with 41 points.

Asante Kotoko play at home again on Thursday 13 May 2021 when they host Ebusua Dwarfs in the matchday 24 games. 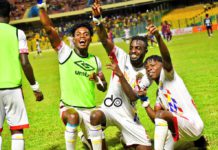