A man, believed to be in his 60s, Yaw Asare, has opened up on his struggles in his bid to make ends meet and cater for his two grandchildren.

As a native of Kwahu Nkwatia in the Eastern Region, he relies on monies made from selling cassava or maize on his two-acre farmland to provide food for the house.

With the support of his wife who is a petty trader, they barely raise enough money to feed their grandchildren whose mother is their daughter.

Agya Asare, as he is widely known, revealed this on Afisem on Adom TV’s Badwam after a video of the two children eating food from dustbins at a refuse site went viral.

The video, which was first shared by a social media influencer, Peditta Osei Assibey, captured the children and their colleagues looking through the dustbins to pick and eat any leftover they could lay their hands on.

But speaking on why the two children aged between seven and 11 landed on the refuse site, Agya Asare noted it is not something he is proud of but believes they were hungry and needed to eat.

“I wasn’t fully aware they had been going to look for food from the refuse site but the point is I don’t have the means to cater for them as they desire. I always buy gari without sugar, rice and other foodstuffs on credit just to fill their bellies,” he sadly narrated.

Asked about their mother’s whereabouts, he noted she is on her own also trying to make ends meet.

“My daughter went to learn dressmaking but has now completed and doesn’t have the money to buy her own machine yet for business. So she sells cooked corn which is also seasonal and that means when there is no corn, she is out of business and has to find another source of income,” he added.

Agya Asare is, therefore, pleading with well-meaning Ghanaians to come to his aid and that of his grandchildren who are in school to give them the life they desire.

Play the video attached for more: 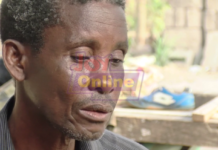