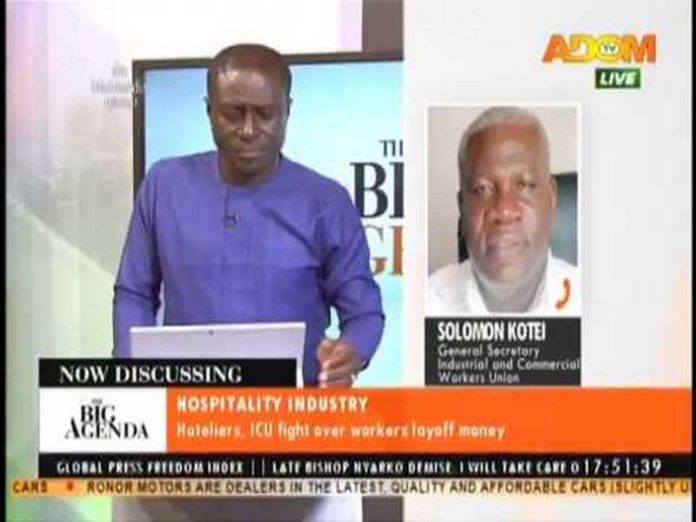 The tens of thousands of employees in the hospitality industry sent home in March will be paid no salaries for April.

This is because there’s no pay plan in sight so long as Covid-19 exists and the borders remain closed, as foreigners are Ghanaian hotels’ main source of income.

For now, the only consolation for the laid off hotel employees is a package the proprietors have pledged to individuals put together for the employees at home.

A meeting held between the Ghana Hotels Association and the Industrial and Commercial Workers’ Union (ICU) failed to agree on salary payments.

Called onto Adom TV’s The Big Agenda, hosted by Captain Smart, Monday evening to speak to the issue of staff payments, the President of the Ghana Hotels Association, Dr Edward Ackah Nyameke, said, “there’s no money; Captain, there’s no money to pay them; there’s no money.”

The ICU had gone into the meeting with the hotels’ executives to obtain April and subsequent months’ salaries for the laid-off workers. That didn’t happen.

For now, what the retrenched workers of Ghana’s hotels should expect is support, according to the financial strength of their companies, which is not necessarily money.

In the near future, the government also may throw in some support for the laid-off staff, both Dr Nyameke and Mr Solomon Kotei, General Secretary of the ICU said on The Big Agenda.