An ex-girlfriend has caused what would be any wedding couple’s worst nightmare as a viral video on social media captured her showing up at the wedding to take her revenge.

For reasons yet to be known, the lady was filmed crashing her former boyfriend’s wedding reception held in a venue yet to be identified.

ALSO READ: I have no plans of talking to Moesha again – Actress Salma Mumin

The unknown couple were seen enjoying their special day when the groom’s alleged ex stormed in screaming his name.

It took the timely intervention of guests who held and took the hysterical woman out of the venue to prevent her from attacking the couple. 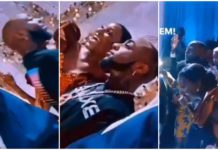 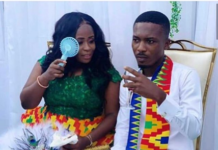