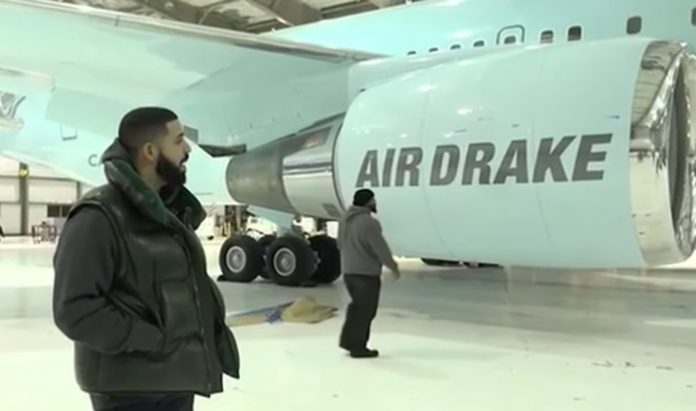 American rapper and singer, Aubrey Graham, popularly known as Drake, is living up to the lyrics in his song Trophies after debuting his new airplane.

The 32-year-old rapper took to Instagram to debut his a new ‘Air Drake’ Boeing 767 cargo plane.

“Anything I got is not a rental, I own that,” Drake says in the song and he even referenced the lyrics in the video posted to his social media page. He said, “No rental, no timeshare, no co-owners.”

SEE THIS: Video: Chris Attoh’s wife shot dead in US

The jet featured the OVO owl symbol, which is the logo for his company October’s Very Own. The plane costs $185 million before any customisation.

Drake took fans on a video tour of the elegant gold and brown interior of the fuselage which had leather sofas, chairs, and a bar.

The video — which he captioned “Nothing was the same for real…” – also showed the emotional moment where the ‘Air Drak’” decal was unveiled.

Drake partnered with Cargojet Inc. for the plane.

“Supporting homegrown businesses has always been a top priority of mine, so when an opportunity came up to get involved with a great Canadian company I was honored to do so,” he said in a statement.