The 1st runner-up of the maiden edition of TV3 music reality show Mentor, Andy Odarky, has finally opened up on why he has not been consistent in the music industry.
Andy was a fans’ favourite artiste who many predicted will take the Ghanaian music stage by storm but that was not to be.
Andy, who was easily noticed due to his walking stick, won the opportunity to record a song “Sweetie” with Batman (Samini) that topped the charts for several months in 2006 – At that point the perception in the public domain was, he had opened the key to limelight.
SEE MORE: VIDEO: Dag Heward-Mills “dances” with church members and shows them how to avoid calls
Interestingly, after that song, Andy vanished from the industry with no song from his camp.
It has been twelve years now and Andy has shared what caused his absence from the industry in an interview with Adomonline’s Dennis Adu.
According to Andy, he signed a 10-year contract with a record label after he had released the hit song with Batman now Samini.
ALSO SEE: Moesha is not alone: For some of us, it’s a project
Right after he penned the contract, Andy said his manager left for the States to take care of his family, a situation he described as unfortunate because it quenched the fire of his musical career.
“My first contract was 10 years. It ended last two years. After releasing the first single the producer travelled and didn’t have time for me but his family. The contract affected me. Right now it’s over and I have a new contract but I have not finalized…”, he said.
Asked if he is back to stay because major crop of his fans are angry at him, Andy pleaded with them to exercise patience since he has in stock, lot of singles and an album dubbed: “Emeri pa” which is yet to be released.
“Now I am back to stay full-time. I can release about three albums. I have songs with Okyeame Kwame, Samini on the ‘Emeri Pa’ album. A lot of my fans are mad at me. They should exercise patience. It is time. I plead with them. It’s not easy. The competition is tight…” 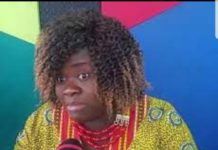