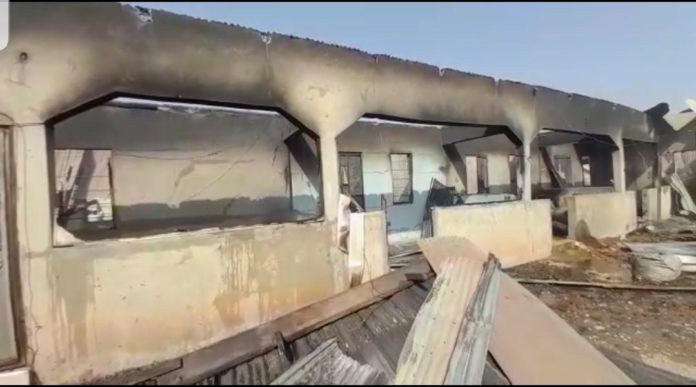 Residents of Kobilimago, a suburb of Tamale Metropolis are counting their losses after fire razed down a compound house.

The fire that started around 7:00 am destroyed property belonging to tenants and landlord, including bags of foodstuff.

Some of the tenants lost belongings such as TV sets, motorbikes, fridges and many other property.

The victims reported the outbreak to the Fire Services at around 8:00am, and the personnel quickly rushed to the scene to bring the fire under control.

Northern Regional spokesperson for the Ghana National Fire Service, ADOII Baba Hudu, speaking to Adom News, said their primary focus was salvaging some vehicles and other property which were yet to be affected.

Of the 16, he said their quick intervention managed to protect four of the rooms inside the building as well as other property.

He attributed the fast-spreading nature of the fire to combustible materials in the building and lack of gable roofs partitioning the rooms.

He also indicated that the victims had no idea of precautionary or emergency measures and watched the fire damage items before calling for help an hour on.

Corroborating his claim, the caretaker of the house, Ibrahim Mohammed, blamed his tenants for failing to call the Fire Service or make any effort to quench the fire.

He indicated that at the time he was called to the scene, light was still sparkling in some cables, suggesting that no effort was made to turn off electric appliances.

Some victims, who spoke to Adom News’ Illiasu Abdul Rauf Dabre, said the fire outbreak hit them like a storm and within hours, they watched all they’ve laboured for burn down.

The cause of the fire is yet to be established as Fire Service is yet to commence investigations.