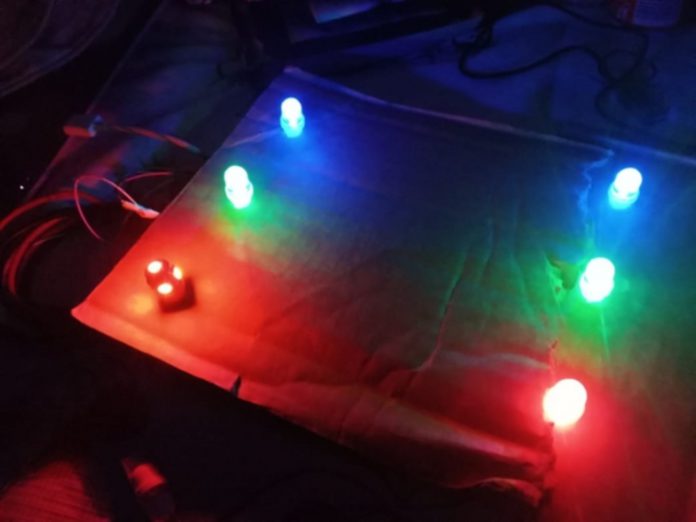 In most minibuses, often referred to as ‘trotro’ here in Ghana, the traditional method of communication between a bus conductor and a driver has been tapping the vehicle.

But the clang sound produced from the beating of the conductor’s palm against the door does not only irritate a number of passengers but also presents some health threats.

In his daily commute in public transport in search of a decent job, Emmanuel Odoom, an unemployed graduate, was challenged to develop the Troffik technology.

The prototype is aimed at improving communication between a minibus driver and his conductor using a lighting system.

The tap sound is no ordinary one, but a conventional means of communication between a driver and his bus conductor – known as the mate – telling the driver to screech to a halt as they on-load and off-load passengers.

The sound is produced from tapping one’s palm on the metallic door of a minibus.

Although the clang sound is to the passenger’s benefit, some passengers argue its intensity appears somewhat irritating and a health threat.

“I have always been complaining. Even this morning, I was on my way from Aputuogya to Atonsu and the way the mate hit the car I was shocked. I was sitting beside him. So I told him to stop doing that because if they continue doing that it would worsen the condition of anybody in the car who has hypertension,” a passenger at Tech Junction lorry station said.

Another passenger suggested that the bus conductors rather communicate verbally than beating hard on the door.

“Noise is not good. Sometimes, the mates deliberately deceive the passengers that another person is joining the bus. Which is mostly untrue. They should learn to talk than hitting hard on the door,” Eno Adwoa said while she joined a minibus to Ejisu.

But are there any effects to the bus conductor constantly seen banging hard on the door?

At the Tech Junction lorry station, bus conductors were actively seen calling for passengers to join their bus to various destinations.

A few who spoke to the news team revealed that they feel pain and sometimes have calluses on their fingers.

“I get blisters on my palm. Because of the pain, I sometimes skip work,” a trotro mate said.

A driver shared that some ‘trotro mates’ deliberately hit hard on the metallic door for no reason.

“Sometimes, some mates hit so hard on the door for the car to stop, but nobody joins. It wastes people’s time,” Eric Nsiah, a driver at Ayigya, said.

An unemployed graduate is changing the narrative.

Emmanuel Odoom holds a master’s degree in Animal Science from the University of Development Studies in Tamale.

But his quest to search for a job after school has proven futile, forcing him to move down south in pursuit of one in Ashanti regional capital, Kumasi.

In his daily struggles for a job in Ghana’s second largest city, Emmanuel was struck to develop the Troffik Light, a coinage from Trotro and Traffic.

“When I moved here to Kumasi, I noticed the trotro mate usually hit the doors of the bus to communicate with their driver. I realized the noise does not only annoy passengers, but the mate sometimes feel pains in the palm due to friction. This motivated me to develop the technology,” he said while fixing an item on his Troffik device.

A click on the switch to the red light indicates a stop to the driver, on the green light means go while the blue light signals a request from the mate to the driver to move the vehicle or not.

“We have the power source. For now, I am using batteries. But it also has a USB port which can be connected to the vehicle to provide power for the technology,” he said.

As a pressing need facing most Ghanaian developers and entrepreneurs, Emmanuel is hoping to advance his technology.

But he is disadvantaged by lack of financial support.