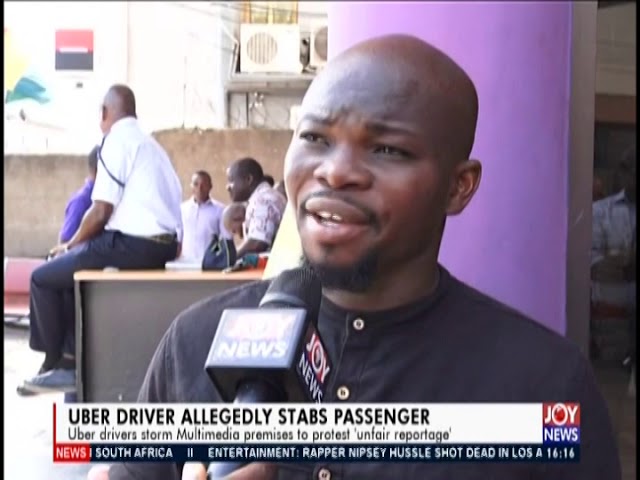 A group of drivers belonging to the Online Private Drivers Association, Monday, stormed The Multimedia Group premises to protest what they say is an unfair reportage involving one of their members.

They say their member, an Uber driver, accused of stabbing a passenger, Daniel Asiamah last week, only brandished the knife in self-defence during the altercation over the right fare.

The transport company, Uber has indefinitely suspended the driver over the incident which started over disagreement about the fare of a trip from East Legon to Labone on Friday and left Mr. Asiamah with a deep cut on his left hand.

The driver is still in police custody and is likely to be arraigned before the court tomorrow.

In a quick response to Joy News’ email, Head of Communication for Uber West Africa, Francesca Uriri said, “What’s been described is deeply upsetting and is in clear violation of our Community Guidelines. Violence of any kind is not tolerated by Uber.

“Upon being made aware of this, our Incident Response Team who are trained to deal with any critical safety issues, have commenced outreach to the Rider to offer our full support. The driver’s access to the App has been immediately removed, and we are currently assisting the police and relevant law authorities with ongoing investigations in this case.”

But the union of Uber drivers stormed The Multimedia Group premises Monday in their numbers seeking an audience.

They say the unfair reportage has already impacted their business with passengers avoiding their services.

Public Relation Officer of the Association, Promise Torgbo Wise, has denied the driver stabbed his passenger.

According to him, the injured passenger held the knife and the driver “unintentionally cut him” in self-defence.

He says the suspect has been in custody since the incident and has been denied bail.

”Our colleague was not interviewed for the side of the driver to be heard and that makes the reportage unfair. The news has given the police and other stakeholders so much power that our colleague is denied bail. We have been there [police station] and they have refused to grant him bail,” he said.

He agrees with their regulations that the driver was wrong to use any harmful object on a rider but if the rider tries to take the driver’s keys, it will lead to such unfortunate situation.