Four people of the same family have died in an accident involving a Mercedes Benz and a Yuntong bus at Alhassan Akuraa in the Kintampo Municipality of the Bono Region.

ALSO: Why Constitution Day celebration is an important milestone [Listen]

The Benz (private), according to reports, veered off its lane and collided with a Yutong bus rendering the driver who happens to be the husband, 65 years, the newly married wife, a son and a brother dead instantly.

The incident, according to Adom News‘ Wiafe Akenten, occurred around 11: pm Monday when the family were travelling from the Western Region to Garu to plan for the funeral arrangement of the man’s mother.

The new couple, Wiafe reported have been married for just one month, adding that the occupants on board the Youtung bus escaped unhurt.

The Benz, however, has been mangled beyond recognition.

Assemblyman for Alhassan Akuraa where the accident occurred also narrated how they tried to rescue the victims.

Listen to full report in audio above: 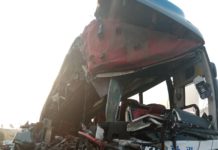