Tiwa Savage received an overwhelming show of love from colleagues in the entertainment industry when she finally laid her father, Prince Olanrewaju, to rest.

The artiste lost her father nearly two months ago, July 20th, after a brief illness.

A funeral service was held for him on Friday, September 3 and videos from the service of songs had the online community in tears.

After the service, Tiwa and her family hosted friends and other guests to a plush funeral reception which has broken the internet.

They were all rocking a blue coloured matching aseobi outfit which the family chose for guests.

A video, sighted online, captured the massive and well-decorated hall which was packed with guests as they wine and dine.

Obi Cubana and his team did what they know how to do best and splashed the mourners with cash. 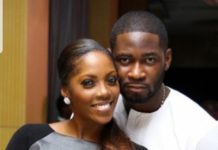 Tiwa Savage opens up on how her sex tape got leaked