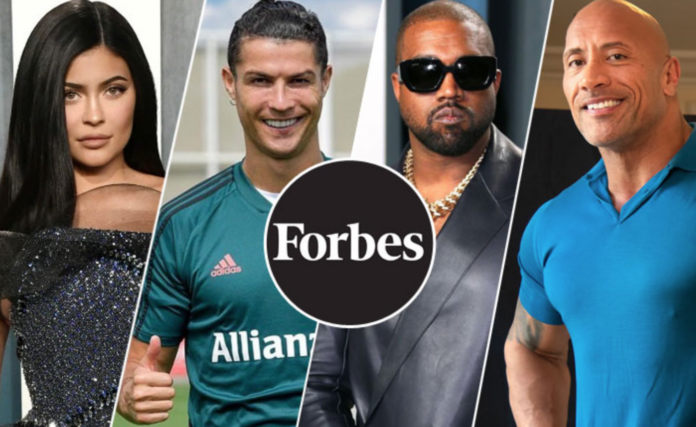 The world’s highest-paid celebrities list has dropped once again.

In 2020, Forbes estimated that the 100 celebrities ranked earned a stunning $6.1 billion before taxes and fees, which is actually down from 2019.

The coronavirus pandemic was the major factor contributing to the $200 million drop in revenue since concerts were canceled, movie releases were postponed, and the world went on lockdown.

Check out the top 10 celebrity earners below:

The reality TV star and Kylie Cosmetics founder sold 51% of her company to Coty, Inc. in January 2019 for a staggering $600 million. She and her famous family also just inked an exclusive multimedia deal with Hulu.

The Yeezy sneaker creator has a design deal with Adidas in which he receives an annual royalty. West also owns his own apparel line outright and announced in June that he has partnered with Gap to create a collab clothing line for the retailer.

The tennis star makes the bulk of his cash from lucrative endorsement deals. His biggest one is with Uniqlo: 10 years for $300 million.

The Argentine soccer star’s contract with club team Barcelona runs out in 2021. Thus far, it has paid him over $80 million annually. He also has a number of endorsement deals including a lifelong deal with Adidas.

The media mogul’s ‘Madea’ franchise has grossed more than $660 million. In 2019, he opened Tyler Perry Studios, a 330-acre compound in Atlanta that includes 12 sound stages and custom sets.

The Brazilian soccer prodigy is currently on a five-year contract with club team Paris Saint-Germain through June 2022. He is slated to make $350 million in salary. He also has endorsement deals with brands such as Nike.

The shock jock is the highest-paid radio host thanks to his deal with SiriusXM. He just re-upped his contract for another five years and it’s reportedly worth $100 million.

The basketball MVP moved to the Los Angeles Lakers in 2018 under a four-year, $153 million contract. He also started his own production SpringHill Entertainment and media company Uninterrupted to create content and has huge endorsement deals with Nike, Beats, Walmart, and GMC.

The actor/producer/businessman has scored huge paydays for upcoming films such as ‘Black Adam’ and ‘Red Notice,’ reportedly making $20 million/film. He also owns liquor company Teremana Tequila and has brand deals with Under Armour.