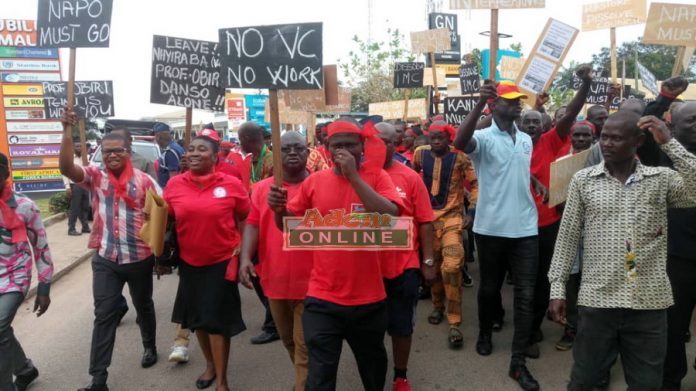 The Teachers and Educational Workers Union (TEWU) has given the government up to the end of next month to take immediate action and address all outstanding issues of concern, else it will declare a nationwide strike.

The issues include the non-payment of the critical support premium, recruitment of more non-teaching staff to support the few staff handling the Double Track Senior High School System, undue delay in releasing the Tier Two Pension Fund to the Ghana Education Service (GES) Occupational Pension Scheme, unfair treatment of non-teaching staff of the Colleges of Education, and market premium for TEWU members at the Colleges of Education.

“It is the expectation of TEWU that by the close of next month, the government and its agencies, particularly the GES, National Council for Tertiary Education (NCTE), the Ministry of Employment and Labour Relations, the Ministry of Education, the Fair Wages and Salaries Commission (FWSC) will help resolve the concerns of the non-teaching staff and ensure that their concerns receive proactive attention to prevent any industrial action from TEWU which can be avoided in the first place,” TEWU said in a statement.

The statement, signed by the acting General Secretary of TEWU, Mr Mark Dankyira Korankye, said there was a risk of a prolonged industrial unrest in the education sector unless the discriminatory tendencies against the non-teaching staff of the Ghana Education Service (GES) and Colleges of Education were stopped with immediate effect.

“The critical role the non-teaching staff play in ensuring conducive atmosphere for teaching and learning in schools, as well as quality service delivery in the broader education sector, should not be lost on government and its relevant agencies. The worry here is that policies for improving the welfare of players in the education sector tend to favour only the teaching staff, with the non-teaching staff sometimes seen as an after-thought,” the statement said.

It said it was unacceptable that the Presidency and other government agencies had not given the needed attention and priority to the issues of discrimination against the non-teaching staff as contained in a number of petitions by TEWU to the relevant authorities alerting them to how its members were always sidelined in policies supposedly aimed at enhancing teaching and learning outcome, and improving the welfare packages of workers in the education sector.

The statement said in spite of the naked discriminatory behaviours by the government, the entire membership of TEWU had exercised patience, especially for the past eight months, with the expectations and understanding that pertinent issues raised in a number of petitions and media statements would have prompted urgent attention from the government and other stakeholders, including the GES.

“TEWU is compelled to once again raise the issues and demand immediate action from the government and other stakeholders to have them addressed by the end of May 2019 in order to avert any nation-wide strike by members,” it pointed out.

TEWU said since August 2018, an advisory group within its fold – called ‘GES Think Tank’ – made a number of recommendations to the government through the Ghana Education Service and the National Council for Tertiary Education after extensive deliberations with the union’s leadership and members.

Those recommendations, according to TEWU, included the non-payment of the critical support premium, recruitment of more non-teaching staff to support the few staff handling the Double Track Senior High School System, and the other concerns raised in their latest ultimatum to the government.