Terry Crews is opening his heart to the world and sharing the story of his life in his emotional, candid new book, Tough: My Journey to True Power.

The actor recently sat down with ET’s Rachel Smith, and offered some insight on a few of the surprising and challenging revelations from his new memoir.

Crews is widely appreciated for his work in comedy, starring in beloved films and sitcoms including Idiocracy, Brooklyn Nine-Nine, Everybody Hates Chris, White Chicks and serving as the affable, supportive host of America’s Got Talent.

However, the actor explained that due to his difficult childhood – living with a physically abusive father and having a strained relationship with his devoutly religious and strict mother – he grew up with anger issues that threatened his career, his relationships and his life.

“You have to understand, I lived life like it was a revenge movie… I mean, for a man like me, it was better than sex. It’s like, ‘I’m gonna get everybody back whoever did anything wrong to me ever,’” he said. “And that is fuel, it’s motivation. But it burns out.”

“[One time], someone disrespected my wife and I literally picked this man up, put him on his head on the concrete and my wife was like, ‘Whoa, that was way overkill!’ It was too much. The punishment did not fit the crime for what he did,” Crews recalled of a time in his relationship with wife Rebecca King-Crews, whom he married in 1990.

“It would happen all the time and my wife pulled me to the side she said, ‘Terry, come here, you have to understand, you’re gonna lose everything.’ She said, ‘At a minimum, you’re gonna get sued, OK? And at the maximum, someone is going to kill you. Either the police, or you come up on the wrong guy on the wrong day.’ She said, ‘I want you to be here for our kids and me…  because I don’t see you being here,’” Crews recalled.

“She was like, ‘Promise me you’ll just walk away. I’ll be OK.’ And I made that promise,” he continued. “And little did I know that it would save my life.”

For Crews, the only way to change his outlook and behavior was to go to therapy – something he’d been conditioned by his community and family as a child to distrust and disdain.

“I had this aversion to therapy that was built in the culture,” Crews said. However, with no real alternative — and because he wanted to get his life together – he decided to try it. “I went and, low and behold, it was like a light that shines. It was like thinking that the sun went around the Earth and then you find out one day that we go around the sun.”

“It was a domino effect. It affected everything,” he added. “It was like if someone said to clean one room and then you notice how dirty the other rooms are… finally, instead of trying to clean the house, I had to tear it down. I tore the whole house down and started over from scratch. It was one of the most painful, unbelievable transformations and it was tough. But it was worth it, because I would not be here right now if I hadn’t done it.”

While Crews said he was able to get through his anger issues, that was far from the only thing his relationship with his wife would have to weather during their marriage. As he discusses candidly in his new book, he also struggled with an addiction to pornography that once again threatened to end his marriage.

However, during their relationship, Crews said the addiction remained and got worse.

“But my wife knew something was wrong because we kept getting farther and farther apart,” he recalled. “And when she addressed me and finally put the question to me, ‘What is it that I don’t know about you, Terry Crews?’ And I told… I was thinking, ‘Well, you know, finally we can get past this.’ She was like, ‘Uh uh, nope, I’m out. I’m gone.’”

“She always said, ‘I love you, this is why I have to leave you.’ That was the whole [thing]. It wasn’t judgmental, it was always like, ‘I love you too much to even stay with you right now,’” he shared. “It was so deep, and I was like, ‘If she can make these kind of statements to me, then how could I not do the work?’”

Crews explained that it took a lot of work to fight his addiction, because a great deal of overcoming it was learning about it and how it was hurting, and where the addiction stemmed from.

“And we did it together. Rebecca was right there and she actually regrouped with me,” Crews said. “I went on a 90-day sex fast [with] her. And people were like, ‘Whoa, that’s crazy!’ But let me tell you something — what was so beautiful about that, was it took me to a time when I was 12 years old and I liked a girl and I didn’t know anything about sex. But all I did was give her a flower and say, ‘I like you for who you are.’” And it wasn’t about sex. It took us back to those moments. I felt like I was 12 years old again, because sex had been taken out of the equation and it was all about love again.”

“I couldn’t believe it. It was the best. At first, I was like, ‘Oh my god, this is gonna be horrible.’ It was the best thing that we had ever done,” he added.

Before reaching this point in their relationship, however, Crews said he reached some fairly dark depths, where he contemplated taking his own life, and struggled with his rage — which he also directed toward himself. And, due to his growing fame, he found it harder to find people who would force him to address his problems.

“When you’re really successful, no one will call you on your stuff. Everyone will tell you, ‘You’re amazing. You’re great. Oh, no, that’s no big deal, man, look at you! You’re making money, you’re famous, your face is on the billboard, you got nothing to complain about.’ But inside, I was a mess,” Crews recalled. “Success is the warmest place to hide.”

The only one who knew something was wrong, and could see though the fog of success and fame, was his wife.

Crews’ new book, Tough: My Journey to True Power – which also details his relationship with his mother, how he got into acting and the many obstacles he’s faced along the way – is out now. 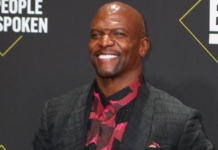