Police in Kumasi in the Ashanti region have commenced investigations into circumstances that led to the death of a taxi driver at Breman in the Suame Municipality.

The deceased has been identified as Kwabena Fosu.

A stench from the vehicle drew the attention of residents who later discovered the body at the back seat of the cab.

They said the taxi with registration number AS-1808-20 was parked in the neighbourhood since Friday, April 22.

Crime scene officers from the Criminal Investigations Department (CID) of the Ashanti Regional Police Command carried out an assessment and conveyed the body to the morgue.

Three arrested over murder of man at Awutu Mampong 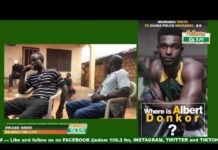 Death of suspect in police custody at Nkoranza; The inside story [Video]