The 27-year-old, Awuche whose story went viral a year ago has praised the Health Minister for intervening in his deteriorating health.

The Minister, Kwaku Agyemang-Manu, has rendered medical assistance at the Tamale Teaching Hospital, where doctors examined him in order to find a permanent solution to his situation.

Suleman Abdul-Samed, a Gambaga resident, had his story originally aired on JoyNews, exposing his predicament as a tall man with a persistent leg ulcer.

Suleman has sores, which he said were causing him to worry about his comfortable and secure existence.

Awuche is his a popular nickname. Whenever Awuche walked to the streets of Gambaga in the past, he was met with public debate and repeated stares at his face.

Visitors spend time seeing him in a surprised manner even now. Those who have the chance to photograph him do so to show the world how tall and massive he is.

Sulemana, however, was not born tall. He noticed he was growing taller and his foot was becoming considerably larger than the size of his shoes when he awoke one day.

He explained,“People said I was getting taller and I was like, how come?.” His height drew considerable notice, and others were curious as to what had happened to him.

The 27-year-old is currently 7 feet tall. He towers over all Northeastern men and women, claiming to be the tallest person in the country.

Awuche is proud of his height because it earns him a place everywhere he goes. He is only 1.3 foot from the world’s tallest man, Sultan Kösen from Turkey, who is 8.3 feet away. That is what makes Awuche so enthusiastic about his height.

When Awuche was 21, he was taken to a pharmacy in Accra for medication but that never yielded any positive results.

The chemists were amazed by his height. Unfortunately, Awuche is unable to recall what the pharmacist said about his condition.

“It has been long. I can’t remember but I know I am not feeling well.”

Awuche, according to a General Surgery Specialist at the Tamale Teaching Hospital, has an underlying ailment called Acromegaly and may have experienced Gigantism as a child, which explains his tall stature.

High levels of growth hormone, if left untreated, can harm the bones as well as other parts of the body.

This can result in serious, even life-threatening health issues. However, treatment can lower the chance of problems and considerably improve the patient’s symptoms, including facial enlargement.

Acromegaly can also lead to gradual changes in the form of faces, such as a protruding lower jaw and brow bone, an expanded nose, thickening lips, and wider tooth spacing.

He also has a chronic leg ulcer, according to Dr Sheriff, which has to be treated.

Dr Sheriff, who is in charge of Awuche’s treatment, wants to ensure he is in good health.

Even when Awuche receives medical treatment, funds are needed to undertake various tests in order to fully treat him.

“I want to get him to run tests for further investigation.” Dr Sheriff.

Dr Sheriff won’t know how much it will cost Awuche to treat him until he has further information on his condition.

As a result, the 27-year-old man is asking the public for financial assistance so that he can have complete treatment. 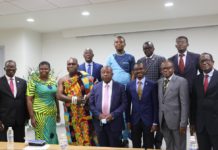