A survivor of the Dompoase-Komenda accident has given a chilling account of the accident that took place in the early hours of Tuesday morning to claim the lives of some 35 people.

Recounting what happened that fateful Tuesday night, the survivor, Issah Yayeh, said even before help could arrive for the distressed passengers, all they could do was to helplessly lie on the road.

As fate will have it for some of them, however, another speeding vehicle ran over the distressed passengers who were lying on the road, killing some on the spot.

Mr Yayeh, who sells second-hand bags for a living said he was travelling from Elubo, a border crossing between Ghana and Cote D’Ivoire, to Accra when the unfortunate incident happened at Dampoase Junction.

According to him, even though he was not asleep when the incident happened, he did not see how the accident happened because it occurred so quickly.

“I didn’t see anything; in fact, I can’t explain what exactly happened. My two friends who were both asleep and I were seated at the back when all I heard was a loud crash between our bus and another,” he said on Adom FMs morning show Dwaso Nsem on Wednesday.

Overwhelmed by his escape from death, Mr. Yayeh who is married with seven children expressed gratitude to God for saving his life.

Listen to audio above for more of his narration. 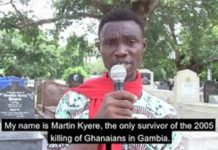