Names of nominees for the 19th Vodafone Ghana Music Awards was released on Saturday and while some artistes are celebrating, others are registering their disappointments.
Sarkcess Music’s Strongman was one artist who obviously expected more from the awards committee because right after the announcement he tweeted:
“So everyday the #sarkeffect #sarkeffect u guys dey talk no only one nomination for the whole TRANSFORMER. This is very bad.”
ALSO SEE: HOT AUDIO: Owusu Bempah responds to wife’s “akpeteshie” report 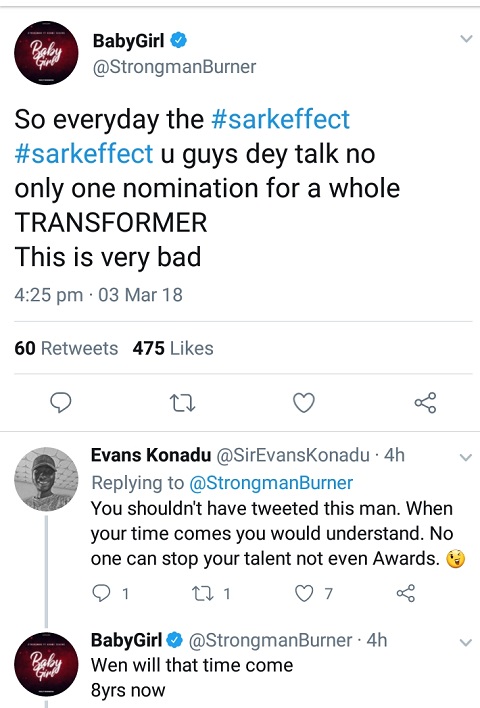 Meanwhile, a fan who felt the musician was jumping ahead of himself, had some advice for the Sarkcess Music act, saying:
“you shouldn’t have tweeted this man. When your time comes you would understand. No one can stop your talent not even Awards.”
ALSO READ: Video: Shatta Michy opens up on why she is not married to Shatta Wale
But the ‘Baby Girl’ rapper replied, saying “When will that time come… 8yrs now”.
Strongman got just one nomination with the Akwaboah-assisted ‘Tranformer’ for his rap delivery in the ‘Best Rapper of the Year’ category.
The annual ceremony which started 2000 has grown to become the biggest event on Ghana’s music calendar.