Singer Sister Derby has shared lovely photos of herself and rapper Joey B to get social media reacting.

In the photo, sighted by Adomonline.com, Derby and Joey B are seen in a position almost kissing or, at least, so it looked.

The duo is rumoured to be having an intimate affair when Joey B first shot to fame with his Strawberry Ginger song.

But in an interview on Daybreak Hitz, Joey debunked the rumours, saying they were only good friends, explaining that Derby helped him with clothes when he was an up-and-coming musician.

Sister Derby has also been equally dismissive about stories claiming she has any form of relationship with her colleague singer.

Meanwhile, some social media users who commented on the photo indicated they were glad the musicians were back into each other’s arms.

This is what some of them said: 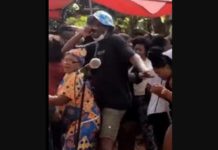