Ghana’s former Finance Minister, Seth Terkper, has been appointed a part-time lecturer at the University of Ghana Business School.

Mr Terkper served as Finance Minister under the John Mahama administration from 2013 to January 2017.

Seth Terkper, who has had many years of work experience with organisations such as the International Monetary Fund (IMF) in the past, announced his new job on Twitter.

“I have just been appointed a part-time lecturer at the University of Ghana Business School. Looking forward to exciting interactions during my Public Policy lectures. In 2017, I did same as a Corporate Executive in residence at UGBS similar to a visiting lecturer.” 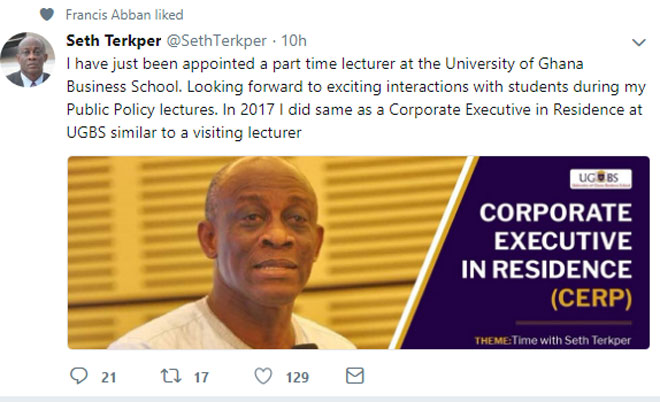 Terkper under NDC 2 and 3

Seth Terkper served a Deputy Finance Minister when the late Prof J.E.A Mills was president. John Mahama then made him the Finance Minister in January 2013. He served in this capacity until the NDC lost the 2016 elections.

Seth Terkper is a chartered accountant. He holds a Masters Degree in Public Administration from the Kennedy School, Havard University.

He obtained his first degree in Business Communication from the University of Cape Coast in Ghana.

When he was the Deputy Minister of Finance, his work focused on the budget and medium-term expenditure framework (MTEF) and on revenue policy and administration.