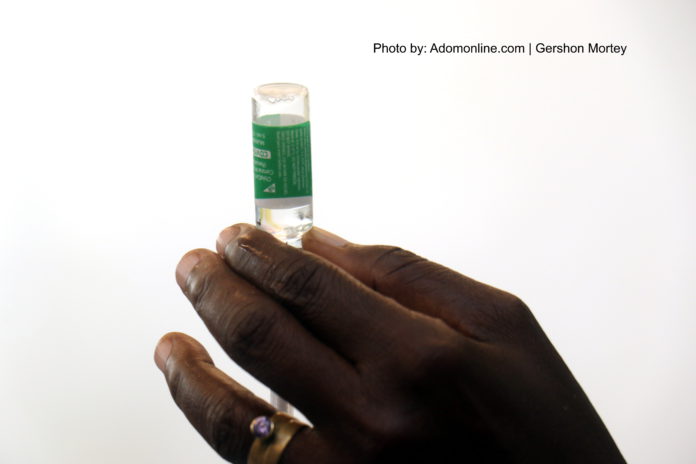 The Director-General of the Ghana Health Service (GHS), Dr Patrick Aboagye, says the first badge of Ghanaians who have been vaccinated will receive the second jab of the AstraZeneca vaccines from the end of April to May.

Speaking to Samson Lardy Anyenini on Newsfile Saturday, Dr Aboagye said persons who were vaccinated about 8-12 weeks ago would be given the second jab as the government seeks various alternatives to procure more vaccines.

According to him, the longer one’s vaccination status which is about 12 weeks, the better.

He also revealed that some seven regions in the country would begin the vaccination exercise as soon as possible.

“There is no scientific evidence now that if you take first shot AstraZeneca, you can take Sputnik second shot but I know there are studies going on to see how it works. So until those results come out, we cannot propose that you will be able to take another vaccine. We need to be cautious to ensure that we have strong evidence on safety and efficacy before we can go ahead,” he said.

In addition, he noted that although the government is facing some challenges in procuring more vaccines from the COVAX facility, other alternatives are being discussed.

He disclosed that the country has procured some vaccines from South Africa and the private sector is also working to procure more vaccines.

“Yes, we are not solely relying on COVAX. We are doing other bilateral organisations. It is not just COVAX but there are also other countries that have stock. We just received some from South Africa through MTN. All these arrangements are going on to be able to get vaccines while we wait for the 6.4 million doses from COVAX within whatever period. The government is also engaging other bilateral, not just Sputnik but others who may have the vaccine.

“There are countries that have vaccines they are not using – the AstraZeneca locked up in countries that may not use them. There is all manner of arrangements that are being done so we are not just relying on.. because we know we are going to have a challenge with COVAX coming in. There is also the private sector approach. Yes, we are all worried but I believe that because we didn’t put all our eggs in one basket, we still hope that we might still be able to get vaccines,” he added.

He noted that the government is committed to ensuring every Ghanaian is vaccinated because the country would only recuperate once every citizen is vaccinated.

He also stated that the country might be looking at a 66 percent herd immunity due to persons under 18 and pregnant women being unable to receive vaccines. However, he noted that the statistics could be reviewed should recent research indicate children below 18 could be vaccinated.

“If you have a herd immunity even for a vaccine that is 50 per cent, it is still protective enough,” he added.

He, therefore, encouraged Ghanaians to participate in Ghana’s research to create its own vaccines and gave the assurance that there are systems put in place to protect participants.

“You don’t do that if you don’t collaborate or participate in such a setting. It is about time we start participating. We must contribute to the global knowledge and also be beneficiaries, and that is how you get technology. The President is working for us to produce our own vaccines,” he said.