President of the Greater Accra School Feeding Caterers Association, Juliana Cudjoe, has blamed the Greater Accra Regional Minister for the termination of her contract as a member of the Accra Metropolitan Assembly.

She claimed Henry Quartey hounded her out of office for speaking on government’s failure to pay caterers indebted to suppliers.

Madam Cudjoe made the comment in an exclusive interview on Adom FM’s morning show, Dwaso Nsem programme Monday, days after she was sacked.

The letter dated June 17, 2022, and signed by the Greater Accra Regional Minister, Mr Quartey, said “H.E. the President, acting under Section (10) sub-section (9a) of the Local Governance (Amendment) Act, 2017, (Act 940), has revoked your appointment as a government appointee with the Accra Metropolitan Assembly with immediate effect.

“You, therefore, cease to be a member of the Accra Metropolitan Assembly accordingly.” No reason was given for the termination.

But madam Cudjoe is certain the termination of her appointment was due to her advocacy for the School Feeding caterers.

She maintained that, they are making huge losses from cooking hot meals for the children with the current amount paid as grant.

Madam Cudjoe said her only crime was asking government to increase the feeding grant from 97 pesewas per pupil to 3 cedis.

“Sacking me won’t prevent me from going to heaven so I don’t care. I know Henry Quartey is behind it,” she claimed.

Moving forward, Madam Cudjoe said she will continue to speak out and put pressure on government until the caterers are paid.

When asked by show host if she would beg government to re-instate her, she said “over my dead body.”

In a rebuttal, the Greater Accra Regional Minister, described as false the allegations being leveled against him.

He said he only acted under the instruction of the appointing authority, hence cannot be blamed.

Mr Quartey urged Madam Cudjoe to accept the decision in good faith and be circumspect in her commentary in the media. 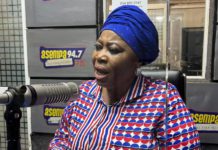 We can’t learn on empty stomachs – Pupils cry to govt 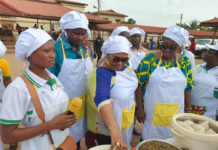