Rapper Sarkodie isn’t taking any chances though he has vowed to never reply rappers who jab him for clout.

In his latest song dubbed ‘Sub Zero’, the Best International Flow rapper has replied a diss song that was made for him by rapper Asem, who has taken a long hiatus from Ghana’s music scene.

According to Asem, Sarkodie jabbed him in a recent freestyle he delivered on his Instagram page urging rappers to take up the music producer Appietus’s Lockdown rap challenge, hence he decided to reply him.

But Sarkodie has replied the ‘Gimme Blow’ hitmaker in less than 24 hours on a Sub Zero song which has since garnered over 120k views on YouTube and trending number one.

Take a listen below: 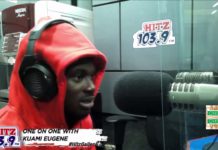