The Chief Executive of the Agribusiness Chamber, Anthony Morrison, has welcomed the resignation of Minister for Food and Agriculture, Dr Owusu Afriyie Akoto, stating that stakeholders have been clamouring for his exit long ago.

He suggested that agriculture needs a required expertise to grow the sector.

According to him, the stakeholders in the sector have been expecting the Minister to be changed long ago.

“It is a welcoming news. He has stayed at the ministry for six years. A lot of people, including myself, have been advocating for a reshuffle to bring in someone who can engage the sector very well,” Mr Morrison said.

Providing some personalities that could handle the ministry, Mr Morrison suggested Professor Eric Dankwa Yirenkyi and Dr Wilfred Hammond as best fits to replace the outgoing Minister for Food and Agriculture.

“For us, we think there are many experts in the sector that we can count on. We know of Professor Eric Dankwa Yirenkyi who has achieved global laurels and awards and a huge person in the African and global agriculture space. We know of Dr Foster Boateng who was West Africa Director for Alliance for a Green Revolution in Africa (AGRA). Also, we know of Dr Winfred Hammond who was a Former Deputy Agric Minister and former Country Director for FAO in Liberia and Sierra Leone. I believe that there are huge potentials in these three agric experts,” he said.

Mr Morrison also highlighted the need to choose someone who is involved in academia, industry and has a relationship with development partners.

“We can go further to talk about the likes of Dr Henry Anim-Somuah and Professor Irene Agyiri, whose efforts and activities have contributed a lot to the sector. Notwithstanding, we need to look for a personality who is in academia, industry involved and works with funding organisations. We need not forget that we must pick someone who development partners are happy to work with,” he emphasised. 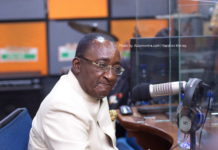