Former Chief of Staff, Mr Kwadwo Mpiani has voiced his opinion on the calls for ministerial reshuffling.

Mr. Mpiani said the reshuffling of Ministers per se may not solve the current difficulties the country is faced with.

Speaking in an interview on PM Express on Wednesday, he said the first thing we should consider is what the call for a reshuffle is meant to achieve.

He noted if a reshuffle is undertaken just for the sake of doing so, no results will be achieved.

Mr. Mpiani was contributing to discussions on the need for a ministerial reshuffle following several calls on President Akufo-Addo to do so.

The President has however ruled out any reshuffle. According to him, there is no justification for the demand.

Speaking in an interview on North Star Radio in Tamale as part of his two-day tour of the Northern Region, the President said he is impressed with his appointees.

“Many of them for me have done outstanding work. Their output has been considerable, and that is what I look at,” he said.

He also claimed that the calls for reshuffling may also come with ulterior motives.

He, therefore, stated that he won’t heed to plans of the NDC to destabilise his government.

“The calls come for all kinds of reasons; NDC wanting to destabilise the government is one. There are people who are also looking for jobs.”

Mr. Mpiani, in reaction used a scenario of a football game to elaborate his point.

“In football, the coach; selects his team, he watches them and as they play the football he decides who should be in and who should be out. If the coach believes that those who are in are doing well then it is left for the coach to allow them to stay in.”

He, however, stated that with the decision taken by the coach, “he should know the consequences of his action.

He added that “if the coach believes that the team he has is the best, who am I sitting outside to say that he hasn’t got the best team.” 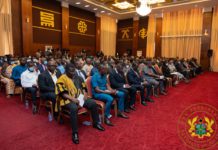